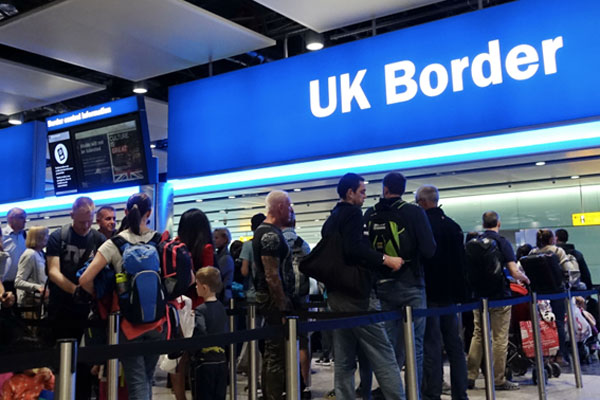 European travel association ETOA has demanded urgent action to prevent severe delays at UK borders and for UK travellers entering the EU in the event of a no-deal Brexit.

Etoa chief executive Tom Jenkins called on the UK government to drop any post-Brexit increase in checks on arrivals from the European Economic Community (EEA) and to seek reciprocal arrangements from the EU as a matter of urgency.

He warned a no-deal Brexit would mean delays of two-to-three hours on arrival for UK travellers to Continental Europe.

Jenkins told an ETOA seminar in London: “Brexit means the UK would be free to relax its border controls, but we need a reciprocal and formal relaxation of controls by Europe.”

He said EC guidance on post-Brexit border checks for UK citizens issued in November makes clear “UK nationals will not be entitled to use the separate lanes provided for EU/EEA citizens“.

He warned: “UK nationals face formal checks on the validity of travel documents, a verification of length of stay and disclosure on the purpose of visit and proof of sufficient means of subsistence.”

Jenkins said: “Such checks would increase immigration queues by 90 seconds per person.

“At airports on the continent we are looking at two or three hours of delay per aircraft from the UK.

“Some airports will hit capacity after two or three UK arrivals. There could be significant delays at channel ports.”

He added: “Not only will British tourists be caught up, but other third-country nationals travelling to the UK and then on to the EU would be badly affected. We are looking at major delays.”

Jenkins said: “The UK Border Force struggles to impose full scrutiny on nine million non-EU arrivals in the UK. It is beyond their ability to do so with an extra 26 million EU visitors.”

The EC guidelines note: “As of the withdrawal date, controls of UK nationals upon entry to and exit . . . will follow the rule of third country nationals.

“They will no longer enjoy facilitations at the borders provided for EU citizens. UK nationals will not be entitled to use the separate lanes for EU/EEA citizens and will be subject to thorough checks of all entry conditions.”

These will include verification of the duration of stay, limited to a maximum of 90 days in a 180-day period; the validity of travel documents; “the purpose and conditions of the stay (e.g. accommodation); and existence of “sufficient means of subsistence” (i.e. the means to pay).

As a consequence, the EC guidelines note: “Travellers are advised to take account of possible delays at border posts, especially at those with heavy volumes of traffic – Eurostar, Eurotunnel and Channel ports.”

In addition: “Luggage carried by travellers entering the EU from the UK will be subject to customs controls.”

Jenkins noted 30,000 UK nationals depart from Dover every day and suggested it could produce “delays of one month on day one” of a no-deal Brexit.

The UK National Audit Office (NAO), in a report in October, noted a no-deal Brexit “could significantly increase” the already “significant operational challenges” at the UK border.

The NAO concluded: “In the event member states apply third-country controls . . . there will be a significant impact on the flow of traffic crossing the border.

“If there is no withdrawal agreement, the government has recognised that the border will be ‘less than optimal’. It may take some time for a fully functioning border to be put in place.”

It noted the government “has not defined what ‘less than optimal’ might mean”.