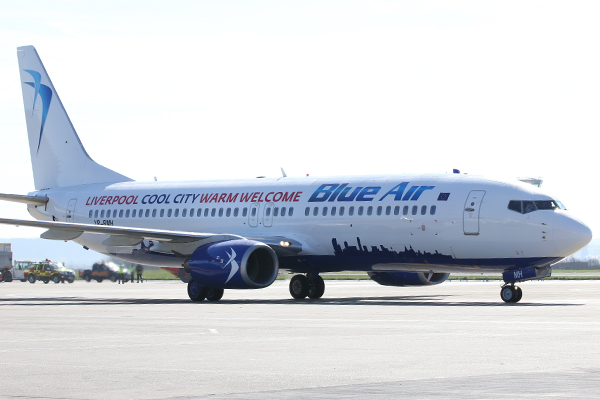 Romanian carrier Blue Air has cancelled some services from Liverpool John Lennon Airport, with Brexit uncertainty reported to be a factor.

A statement from the airport said: “Blue Air has successfully operated its based aircraft for two years in Liverpool serving a wide range of routes.

“Unfortunately as a Romanian Air Operator Certificate (AOC) holder, the current Brexit impasse means that the carrier has been unable to receive the necessary clarity regarding their ability to operate seventh freedom services which are currently possible under EU Open Skies.

“The carrier will continue to serve Liverpool John Lennon Airport and will increase flights this summer to Bucharest and Bacau.”

Seventh freedom services under the European Union Open Skies agreement refer to flights between countries which are not an airline’s home country.

The Independent reported that dozens of passengers expecting to fly to Rome and Alicante complained their flights with Blue Air had been cancelled on Wednesday night.

The newspaper said that the airline announced earlier this month that it was downsizing its operations at Liverpool, where the airline plans to offer services from Bacau and Bucharest only.

Blue Air flights from Luton have also been affected, and a Luton airport spokesman said the summer schedule to Turin, starting at the end of March, is no longer on sale.

However, the Blue Air services from Luton to Bucharest and Iasi in Romania, and Larnaca in Cyprus, are still on sale.

Travel Weekly has contacted Blue Air for a response.