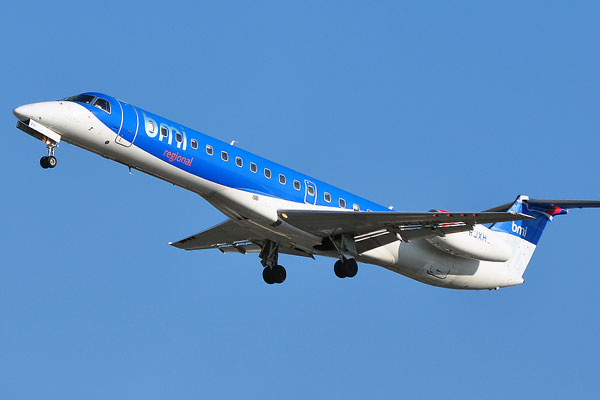 The East Midlands-based regional carrier operated 17 regional jets on routes to 25 European cities with 376 staff based in the UK, Germany, Sweden and Belgium.

All flights were cancelled with customers who booked directly with flybmi told to contact their payment card issuer to obtain a refund for flights which have not yet taken place.

Around 1,000 passengers are understood to have been due to fly with the airline on Sunday, at the start of the February school half term holidays.

Flybmi advised passengers who have booked flights with a travel agent or a codeshare partner airline to contact them “for details of options available”.

Those with travel insurance should contact their insurance provider to find out if they are eligible to claim for cancelled flights.

On Sunday, Loganair stepped in to secure three key routes from Aberdeen to Bristol, Oslo and Esbjerg.

He added: “It should give government – and other parts of the industry who relentlessly champion passenger growth but too frequently neglect the challenges carriers face – pause for thought about the costs they are asking airlines to absorb and to what extent this is sustainable into the future.”

A flybmi spokesperson said: “It is with a heavy heart that we have made this unavoidable announcement today.

“The airline has faced several difficulties, including recent spikes in fuel and carbon costs, the latter arising from the EU’s recent decision to exclude UK airlines from full participation in the Emissions Trading Scheme.

“These issues have undermined efforts to move the airline into profit.

“Current trading and future prospects have also been seriously affected by the uncertainty created by the Brexit process, which has led to our inability to secure valuable flying contracts in Europe and lack of confidence around bmi’s ability to continue flying between destinations in Europe.

“Additionally, our situation mirrors wider difficulties in the regional airline industry which have been well documented.

“Against this background, it has become impossible for the airline’s shareholders to continue their extensive programme of funding into the business, despite investment totalling over £40m in the last six years. We sincerely regret that this course of action has become the only option open to us, but the challenges, particularly those created by Brexit, have proven to be insurmountable.

“Our employees have worked extremely hard over the last few years and we would like to thank them for their dedication to the company, as well as all our loyal customers who have flown with us over the last 6 years.”

The airline carried 522,000 passengers on 29,000 flights last year. It is not know how many forward bookings are affected.

Flybmi operated as part of Airline Investments Limited which is also the holding company of Scottish carrier Loganair.

There is no suggestion that Loganair faces similar trouble.

In a statement, Loganair said: “The two airlines are separate businesses, operating separate aircraft fleets on their own distinct route networks.

“As such, the closure of bmi Regional – which flew Embraer regional jet aircraft on routes throughout 12 European countries – has no impact on Loganair’s continued operation, which predominantly uses turboprop aircraft on routes within the UK and in particular to, from and within the Scottish Highlands & Islands.

“The same challenges that have led to bmi Regional ceasing operations, including uncertainty around intra-European traffic rights post-Brexit, do not impact Loganair’s business.

Managing director Jonathan Hickles said: “Loganair expects to return to profit in the current financial year, is carrying record passenger numbers on many of its routes and is in a strong financial position.”

“We are actively working on options to offer employment to a number of bmi Regional staff members whilst at the same time monitoring developments elsewhere in the UK regional airline sector which could present opportunities for Loganair.”

In advice to consumers, the Civil Aviation Authority said: “If you booked directly with British Midland Regional (flybmi) and paid by credit card you may be protected under Section 75 of the Consumer Credit Act 1974 and should contact your card issuer for further information. Similarly, if you paid by debit or charge card you should contact your card issuer for advice as you may be able to make a claim under their charge back rules.

“If you have booked flights or a trip that includes flights with a travel firm that holds an Atol and received confirmation that you are ATOL protected, the travel firm is responsible for your flight arrangements and must either make alternative flights available for you so that your trip can continue or provide a full refund.
“If you are abroad, it should make arrangements to bring you home at the end of your trip. Contact the Atol travel firm for more information.”

Ryanair has released special rescue fares on UK domestic routes (Belfast-Stansted) from £9.99 and European routes (Milan Bergamo and Nuremberg) from £14.99 for customers affected by flybmi filing for administration.

EasyJet stepped in with one-way rescue fares of £80 for flybmi passengers on the Bristol-Paris route.

The Department for Transport said: “It is very disappointing that flybmi has gone into administration and we know this will be a very difficult time for those who have lost their jobs as a result.

“This will also of course be disruptive for passengers. We are fully focused on supporting those affected and are in contact with airports, airlines and other transport providers to ensure everything possible is being done to help them.”

“Regrettably Balpa had no warning or any information from the company at all.

“Our immediate steps will be to support flybmi pilots and explore with the directors and administrators whether their jobs can be saved.”

Which? Travel editor Rory Boland said: “This is terrible news for flybmi passengers, who will be seeking urgent advice on what steps to take.

“Some customers have claimed that tickets were being sold in the hours before the airline went bust, knowing full well those tickets would never be honoured, and passengers will rightly be outraged if this is proved to be the case.

“As all future flights have been cancelled, flybmi customers should explore their options for refunds. If you purchased your flight as part of a package you should be Atol protected, which means you should get a refund.

“However, if you didn’t book as part of a package you may be able to claim the cost back through your travel insurance or credit card issuer, but it depends on your circumstances.”

Abta said: “The options available to customers who are due to travel with the airline will depend on what they booked.

“Customers due to travel with the airline are advised not to go to the airport and instead should do one of the following:

If your flights are part of a package it will be for the package organiser to sort alternative arrangements or provide a full refund for the package holiday, so contact your travel company as soon as possible.

If you booked your flights directly with the airline you won’t have Atol protection. If you paid for your flights with a credit or debit card, you should contact your card company. You should also contact your travel insurance provider to see if your policy covers this circumstance.

You should speak to the agent in the first instance, for advice.