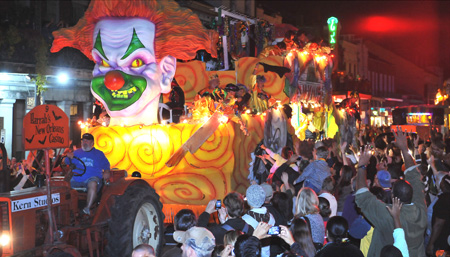 Many cities try to lay claim to the title ‘America’s most haunted’, but New Orleans can give any of them a run for their money. Beyond the incomparable cuisine, historical must-sees, musical high notes and never-ending nightlife, the Big Easy also has plenty to send a delicious shiver running down any visitor’s spine.

Recommend clients book a ghost tour around the beautifully picturesque French Quarter. Guides conjure up local legends of gruesome ghouls and weave the fascinating history of the city into the plot.

The dead are pretty visible in New Orleans – they have to be, or they’d float away. In the 18th century, when the inhabitants tried to inter their loved ones beneath the ground, the high water table meant they simple rose back up again. So the graves are built above ground, forming real cities of the dead. Visitors can pace these streets on a cemetery tour.

St Louis Cemetery No 1 on Rampart Street is the oldest existing example, dating back to 1789. The architecture of the graves illustrates the cultural melting pot of the city, with French, Spanish, Italian and Portuguese styles evident. One of the graves belongs to the famed voodoo queen Marie Laveau.

The tour ends with a visit to a voodoo temple to meet a voodoo priestess, which is far less intimidating than one might expect. Priestess Miriam looked like any other middle-aged lady, and rambled to us vaguely, but kindly before showing us the temple.

If you were expecting heaps of bones and lashings of chicken blood you’d be disappointed – instead we’re lead into a dim room filled with a mish-mash of objects and artefacts, many related to religions from all over the world. There’s even a gift shop.

For a real supernatural thrill, send clients there during Halloween. Second only to Carnival in the party time pecking order, you wouldn’t be surprised if the dead really did come out to join the fun.

Spooky floats parade along the streets and many revellers dress the part in elaborate costumes, with local bars offering prizes for the best. As well as balls and parties, there are also family events where kids can have a go at cookie decorating and pumpkin painting. The Voodoo Experience music festival also falls around Halloween – this year, acts included Lenny Kravitz and Eminem.

The world’s biggest street party lasts for nearly a week, with different ‘krews’ organising parades of elaborate floats through the city. Outside Mardi Gras season, send clients to Blaine Kern’s Mardi Gras World. It’s surreal and exciting to wander through this huge workshop where floats are made and stored. Visitors can try on costumes and sample a slice of traditional king cake.

Not just a cultural but also a culinary melting pot, New Orleans cuisine brings together influences as broad as French, Spanish, African and the Deep South itself.

For the best of Creole and Cajun cooking – with a musical accompaniment – send clients for jazz brunch at The Court of Two Sisters.

They can sit out on the picturesque terrace, trying specialities such as gumbo, jambalaya and turtle soup. Local desserts are mouth-watering too, from Bananas Foster to beignets, the local doughnuts dusted with sugar that are best enjoyed with a cafe au lait.

Home to legends such as Louis Armstrong, New Orleans is called the birthplace of jazz. Music is everywhere, from the raucous bars of Bourbon Street and trendy clubs on Frenchmen Street to historic venues such as Preservation Hall. Recommend clients take a jazz dinner cruise on a traditional paddlesteamer such as the Natchez.

Views of New Orleans don’t come much more spectacular than from the Westin Canal Place, which stands on the borders of the French Quarter. Above 10 floors of shops and offices, this deluxe hotel stretches up to the 29th floor, where a rooftop pool offers panoramic vistas of the city and the Mississippi. Rooms are large and have a clean-lined, modern luxury feel.

Many of the big chains have hotels in town, including Hilton, Marriott, Ramada, Ritz-Carlton, and InterContinental, or there are small boutique properties in the French Quarter.

Premier Holidays offers four nights’ accommodation-only at the Holiday Inn from £999 on departures in May or June 2010, flying with Continental Airlines from Heathrow. 0844 493 7444, trade.premierholidays.co.uk