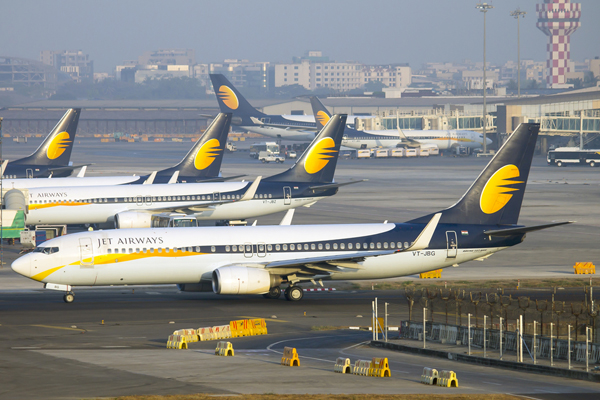 Indian airline Jet Airways will be taken over by a consortium of lenders, led by the State Bank of India, to stave off insolvency as its founder Naresh Goyal stepped down.

Jet Airways has been in deepening difficulty for months, with all but 41 of its 123 aircraft grounded and two-thirds of its flights cancelled last week.

Aircraft leasing companies had refused to let the carrier’s aircraft take off because of unpaid bills and pilots, engineers and other crew have gone unpaid for months.

But at a board meeting on Monday, Jet Airways’ directors approved a deal whereby the airline’s debt will be converted to equity and bank lenders, led by the State Bank of India (SBI), will become the majority shareholders.

Goyal will step down from the board along with his wife Anita and a third director, Kevin Knight, who was nominated by Etihad Airways.

Etihad, which owns a 24% stake in Jet Airways, will retain one nominee on the board and Goyal two.

The banks agreed to provide an immediate loan of INR 1,500 crore ($217 million) to allow Jet Airways to resume operating.

In a statement, the board said: “The company will also engage with payment intermediaries for release of trapped cash.

“The airline will leverage the funding to partly clear pending dues towards lessors, vendors, creditors and employees in a phased manner.

“The move will see Jet Airways re-deploy several of its grounded aircraft back into its network, helping re-new many of the routes it had suspended.”

The carrier appeared poised to go into insolvency at the end of this month without a deal being signed off.

A deal agreed between Goyal, the banks and Etihad in February had stalled due to a dispute about Goyal’s continuing involvement with Jet Airways.

Etihad chief executive Tony Douglas made clear weeks ago that Etihad would provide no more money without Goyal’s removal.

Goyal wished to stay on and had reportedly “disavowed” a memo of understanding on the deal because he rejected a limit on his stake in the airline.

Etihad then threatened to exit its joint venture with the airline rather than provide emergency funds and asked the State Bank of India to buy its stake.

That had led Jet Airways to cancel its flights to and from Etihad’s base at Abu Dhabi.

Jet was due to default on a further loan repayment of $109 million this week and its pilots have threatened to strike from April 1 unless they receive their back pay.

Goyal established Jet Airways in 1992 and retained a 51% stake in the carrier, India’s second biggest.

He said: “I have taken the step of stepping down from the board of Jet Airways for the sake of my family [and of] 22,000 employees and their respective families.”