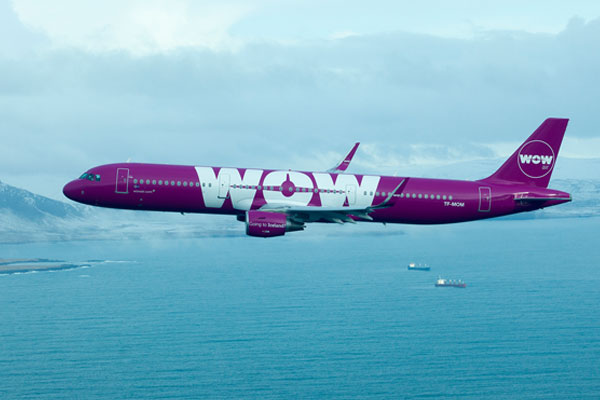 All flights have been cancelled leaving thousands of passengers stranded.

The airline had been trying to compete a refinancing deal.

Wow Air had previously revealed plans for a financial overhaul after rival Icelandair withdrew from possible take over discussions for a second time.

But the airline said today: “Wow Air has ceased operation. All Wow Air flights have been cancelled.

“Passengers are advised to check available flights with other airlines.

“Some airlines may offer flights at a reduced rate, so-called rescue fares, in light of the circumstances. Information on those airlines will be published, when it becomes available.

“Passengers whose ticket was paid with a credit card are advised to contact their credit card company to check whether a refund of the ticket cost will be issued.

“Passengers who bought their ticket from a European travel agent (within the European Economic Area) as a part of a package tour (a package which includes flights and accommodation or other services) are protected by the Package Travel Directive. Those passengers are advised to contact their travel agent to arrange an alternative flight.

“Passengers may also be entitled to compensation from Wow Air, including in accordance with European regulation on air passenger rights. In case of a bankruptcy, claims should be filed to the administrator /liquidator.”

Wow Air was criticised by consumer champion Which? Travel for still accepting bookings up until this morning.

Editor Rory Boland tweeted: “If it can’t currently afford to fly its planes it shouldn’t be flogging tickets to passengers.”

Wow Air halved its fleet to 11 aircraft in December in what was described as a “drastic measure” to cut costs following spiralling losses of $33.6 million in the nine months to September 2018.

The airline was due to switch a daily Gatwick-Keflavik service to Stansted from March 31.

Separately, the Foreign and Commonwealth Office warned of possible disruption to bus and coach services between Keflavik international airport and the Icelandic capital of Reykjavik due to planned industrial action.

“This is likely to last 48 to 72 hours at a time throughout spring 2019 and other airports in Iceland may also be affected.” The FCO said in an updated travel advisory.

“Before travelling, you should contact your bus or coach company for the latest information and factor in any possible delays to your journey time.”