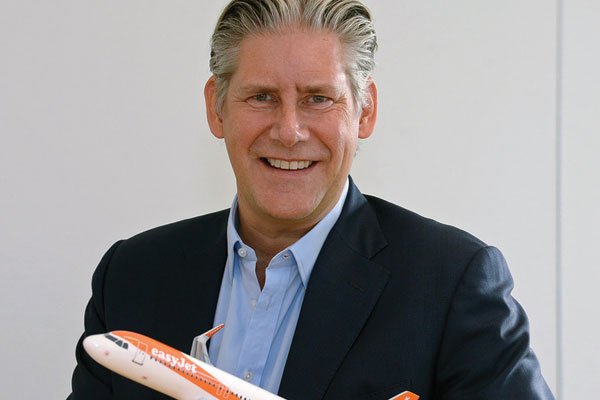 Unanswered questions over Brexit is hitting demand for easyJet flights over the summer, the budget airline’s boss admitted today.

Chief executive Johan Lundgren was speaking as the carrier confirmed previous expectations of a winter pre-tax loss of around £275 million and voiced caution over the remainder of the year.

The airline said: “Whilst easyJet will deliver H1 results in line with expectations, macroeconomic uncertainty and many unanswered questions surrounding Brexit are together driving weaker customer demand in the market, such that we are seeing increasing softness in ticket yields in the UK and across Europe.

“Given this uncertainty our outlook for H2 is now more cautious.”

However, revenue per seat at constant currency is expected to have declined by 7.4%.

Headline cost per seat excluding fuel at constant currency is expected to increase by 1.4% for the half, in line with expectations.

“This reflects investment in resilience in advance of the busy summer period and in particular higher ownership and crew costs,” easyJet added.

Lundgren said: “EasyJet has performed in line with expectations in the first half. We have flown around 42 million customers with a significantly reduced number of cancellations and continued high levels of customer satisfaction.

“We are operationally well prepared for Brexit. Now that the EU Parliament has passed its air connectivity legislation and together with the UK’s confirmation that it will reciprocate, means that whatever happens, we’ll be flying as usual.

“I am pleased that we have also made progress on our European ownership position which is now above 49%.”

But he added: “For the second half we are seeing softness in both the UK and Europe, which we believe comes from macroeconomic uncertainty and many unanswered questions surrounding Brexit which are together driving weaker customer demand.

“We are rolling out further initiatives to support our trading and are making significant progress in our operational resilience programme, which is designed to make the easyJet flying experience better for our customers over the summer.

“As a highly profitable airline with one of the strongest balance sheets in aviation easyJet is well positioned to seamlessly connect Europe with the warmest welcome in the sky.”

The airline is due to issue  further details on its performance in the six months to  March 31 and forward looking guidance at its half year results on May 17.