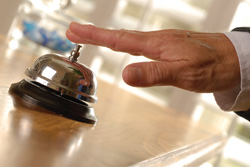 The hotel industry has avoided the worst of the recession, thanks to the determination of customers to travel and the emergence of more efficient online distribution systems.

Accountancy giant Deloitte has predicted the worst of the downturn should be over for hoteliers in Europe, with London leading the sector out of the recession.

“Interest rates have helped in terms of the cost of financing debt on hotels, so there has not been the failure of hotel groups we have seen in some recessions.”

Rust said consumer attitudes to travel had changed since the last recession, with holidays prioritised above many other forms of expenditure. Add to that the rise of low-cost carriers, meaning the price of travelling to a destination can be kept to a minimum, and the hotel trade has fared better than feared. Cost-conscious customers have also been able to take advantage of a revolution in the distribution of rooms.

“If you go back to the last recession, the internet didn’t exist,” Rust said.

“It is hard to prove, but my feeling is hotels have benefited from the ability to either reach the consumer directly or through third-party distribution channels.

“This means they have been able to changes prices more quickly and repackage offers in a way the consumer can take up more quickly.”

Looking at Deloitte’s latest RevPAR (revenue per available room) figures – the best measure of hotel performance – the UK is leading the rest of Europe out of recession.

London, in particular, has fared well, benefiting from its status as a must-visit city and commercial centre, and the low value of the pound against the euro and US dollar. This has led to surprise among some commentators that rates have been increasing, even though the UK is still officially in a recession, but Rust said this was a reaction to increased demand.

Even in the first nine days of 2010, when the UK was enduring atrocious weather conditions, RevPAR in London was up 8.7% on the same nine days in 2009.

“London occupancy is above where it was in 2007, at around 85%. That means hotels have more discretion and a lot more power to move prices because they are basically full,” Rust said.

London’s performance was underlined by Trivago.co.uk figures, showing an average 12% reduction in prices in Europe this month, whereas hotels in the UK capital had maintained last year’s January rates.

The strength of the euro has, however, had a major impact in eurozone countries, with traditional leisure destinations such as Spain bearing the brunt.

However, analysis of the figures suggests it is not necessarily all down to a collapse in the leisure market. RevPAR for markets that are dependent on corporate travel have suffered most, and where there is a mix of business weekend RevPARs, sugg-esting leisure travel, has held up best.

Rust added: “The Spanish market last year to November was down by 19.6% (RevPAR) – that’s a significant drop compared to the UK, which was down 9%. For UK outbound, the eurozone is looking expensive. Spain has had a large element of construction in its economy but has now stopped in terms of that activity.”

The US market was down across the board, Rust said, with Washington, having benefited from the Barack Obama election, one of the better performers but still down 15%. New York RevPAR was down 28%.