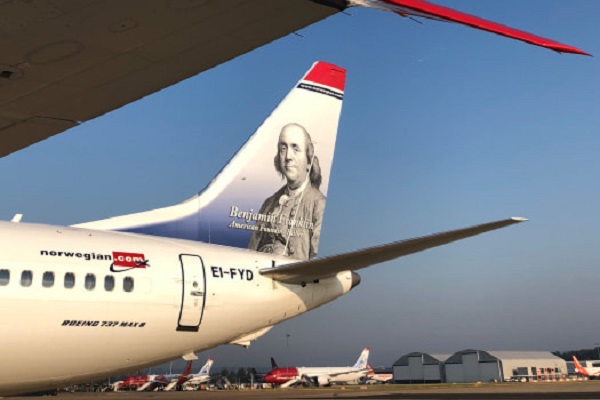 Norwegian today pledged to ensure flights are maintained as scheduled while Boeing 737 Maxs remain grounded at a cost of £45 million.

The plunge further into the red was incurred despite a 14% year-on-year rise in revenue to almost NOK 8 billion and an 8% cut in costs, excluding fuel.

Chief executive Bjorn Kjos said the carrier was “currently assessing” the financial impact of the grounding of Boeing 737 Max 8 worldwide.

“The updated guiding includes negative effects from the 737 Max 8 grounding of up to NOK 500 million (£45 million),” he added in the airline’s quarterly report.

Kjos also revealed that the airline has contingency plans in place based on the different Brexit scenarios, including a hard Brexit.

Passenger carryings rose by 9% to more than 8 million in the winter three months.

The carrier reiterated its “key priority” of returning to profitability through a series of measures, including an “extensive cost-reduction program, an optimised route portfolio and sale of aircraft”.

Cuts of NOK 467 million were achieved in the quarter due to the airline’s internal cost reduction programme, #Focus2019.

Norwegian strengthened its balance sheet through a fully underwritten rights issue of NOK 3 billion, “which secures a stronger financial position”.

Norwegian added: “The company is well positioned to continue to attract new customers, not least in the long-haul market, where the development is stronger than in the short-haul market.”

The airline temporarily suspended operation of its 18 Boeing Max 8 aircraft last month following the worldwide grounded of the type following two fatal crashes in October and March. Further deliveries have been put on hold.

Norwegian combined flights and booked customers to other departures within its network, “consequently reducing the impact on passengers”.

The airline plans to continue to limit passenger disruption by also offering flights by wet leasing other aircraft “whenever necessary”.

Norwegian added: “The number one goal is to operate its schedule according to plan.”

Kjos said: “Our dedicated colleagues at Norwegian have been working day and night to find solutions for our customers.

“They will continue to do their utmost to ensure that all flights continue to depart as planned, regardless of how long the Max stays out of service.

“We have had some productive meetings with Boeing where we have discussed how we can manoeuvre through the difficulties the Max situation is causing Norwegian.”

He added:“I’m pleased with the positive developments this quarter, despite the 737 Max issues.

“We have taken a series of initiatives to improve profitability by reducing costs and increasing revenue.

“We are optimising our base structure and route network to streamline the operation as well as divesting aircraft, postponing aircraft deliveries and not least implementing our internal cost reduction programme, which will boost our financials.