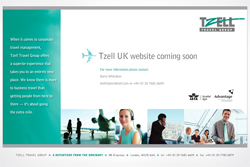 Travel agents who have lost their jobs during the recession or who are simply looking for a new opportunity are finding refuge in Tzell Travel Group.

The US business travel giant opened its first office in London in early 2008 and has “aggressive plans” to make its mark on the UK this year.

In the US, Tzell Travel Group is a $1 billion operation with head offices in New York and 400 agents in 50 locations around the country.

Its success reflects the travel agency trend away from traditional shops to other business models, such as homeworking. In Britain, this trend has seen the homeworker sector grow from almost zero to about 2,000 agents in the past 10 years, according to ABTA, partially offsetting a drop in high street outlets from 9,000 to 6,000 since 1999.

In the UK, however, Tzell is still at the fledgling stage, with eight agents working from home or from the company’s offices in London.

Unlike a normal travel management company, Tzell does not have employees but ‘independent contractors’. It provides an office, invoicing and administrative support, and financial protection, as well as competitive supplier deals through its membership of Advantage Travel Centres.

Agents or agencies which join the group bring their own clients and earn a living off their commission, a proportion of which goes to Tzell. New joiners are often given a “liveable” wage until they are able to rely on their commission.

The model suits agents who might have been made redundant or who have ambitions to branch out on their own. It also suits independent agencies who want to cut out the costs of their business, the firm claims.

Agents can work from home or from Tzell’s temporary offices in Holborn, London. The firm is looking for a permanent home in Covent Garden.

The general manager of the London office is Barry Whittaker, formerly of Travel Counsellors and a former board director for Abercrombie and Kent. He said: “Tzell looks after all the back-office work so that agents are free to focus on what they do best – selling.”

In London, Whittaker is looking for opportunities to work with both individuals and small to medium-sized agencies. The group has aggressive growth plans and is also in the market to acquire independent UK agencies.

“Agencies can relinquish their IATA licence and we take away their cash flow worries. They still keep their agency name and identity.”

To succeed with Tzell, agents need to bring a following of clients with them, meaning the model best suits those with several years’ experience.

“Agents don’t always realise they have such a loyal client following,” said Whittaker. “It can be scary at first as it means giving up a salaried job.

Working like this requires a different mindset, but once agents get used to that, it works.”

Tzell agents in the UK office tend to gravitate towards niche markets such as the banking and entertainment sectors.

Whittaker is also keeping an eye out for an agent that specialises in providing “VIP concierge” travel.

I’d worked at BCD Travel for 10 years and I was tired of commuting from Brighton to London each day. A friend told me about Tzell and I liked the fact that you could work from home or in the office.

It also means you are your own boss, so you can work when you want and you earn more money than working for an agency. You get all the benefits of working for yourself without having to go it alone.

It was daunting at the beginning but if you do a good job you’ll be surprised how many clients will follow you.

I had a couple of panicky months, but it worked out great and I’ve never looked back.

When clients heard I was setting up on my own they were really supportive. They like that they speak to me every time they call. I specialise in the entertainment industry, arranging travel for production companies and music agents.

For them, service is everything so I have to be extra-careful where I send them and make sure I’m aware of the latest offers and hotels.

I have built up trust and rapport with them so that’s why they came with me.