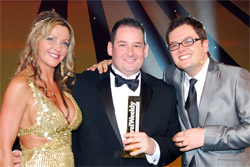 On The Beach commercial director Johnny Pollard has had a particularly auspicious start to the year both personally and professionally.

He picked up two accolades at Travel Weekly’s Globe Travel Awards in January: the Penny Akam Award for Unsung Heroes and the Agency of the Year title for On The Beach.

The first was in recognition of the brave way he successfully battled a period of illness; the second for the achievements of his online travel agency.

So what does 2010 hold for this father of two and one of travel’s fastest-rising stars?

On The Beach started in 1995 as one of the first of a new breed of online travel agencies and now carries more than 500,000 passengers a year.

Pollard joined On The Beach three months after it was set up by chief executive Simon Cooper, but he was no newcomer to the industry.

He had previously worked for Thomas Cook, Airtours, First Choice and call centre Holidays By Phone, where he worked alongside On Holiday Group chief executive Steve Endacott.

Pollard was about to set up his own business when he met Cooper. “With his ideas and my industry knowledge, I knew we could make it work,” he said.

The two entrepreneurs started with four employees working out of a humble terrace house in Macclesfield. When staff numbers rose to 35 they realised it was time to move on and relocated to an office in Didsbury, Manchester.

“We first went into the family, all-inclusive market in Egypt and Turkey because lots of companies were doing £99 deals to Benidorm. That worked very well for us as it has a higher selling price,” he recalled.

Pollard recognises the importance of always keeping up with new developments in the fast-paced world of travel.

TripAdvisor reviews were added to the site six months ago and the agency is working on launching a revamped website featuring a new logo and fresh look and feel in the coming weeks.

“You have to keep up with technology. It’s not just about price but about the whole experience,” Pollard added.

In 2007, a 50% share in the company was bought by venture capitalists ISIS Investments and John Donaldson became chairman.

Donaldson is a former Thomas Cook group chief executive and deputy chairman, and had also sat on the board of Holiday Autos.

“Having a non-executive board means we are now able to spend time on our own specialist areas and they bring a wealth of knowledge to the company. It has really helped push the business forward,” Pollard said.

Other plans for 2010 include creating a feed from Gold Medal for scheduled flights. Pollard is also keen to move into long-haul markets.

“We are missing out massively on Dubai, especially since it’s become more affordable,” he said.

Pollard is also on ABTA’s membership committee, a position from which he has witnessed the closure of many traditional travel agencies.

He said: “Some independents will do enough to keep going, but the closure of shops shows that online is beginning to dominate travel.”

On The Beach claims its prospects look good. Pollard said peak sales in January were boosted by the severe weather, as customers browsed online.

He also predicted that bookings for Spain would pick up this year after it was hit hard by the weak value of the pound against the euro in 2009.

“Spanish hoteliers can’t keep their prices up anymore,” he said. “The quality is also improving as some chains have removed poorer properties. Turkey will see a small uplift in prices, but it will still be popular.”

Despite this optimism, there remains some uncertainty hanging over the online sector.

Last year, the Civil Aviation Authority took legal action against rival firm Travel Republic and its director Kane Pirie for what it said was a breach of ATOL regulations.

This was basically a test case for all DIY agencies, like On The Beach, operating online, but the magistrate dismissed all charges, prompting the CAA to appeal the decision.

Some say the not-guilty ruling has already boosted the number of agents moving into the DIY market, but the looming appeal means uncertainty remains for companies with a similar business model.

With regulatory reform assured due to the current review of the UK’s ATOL regulations and the European Package Travel Directive, Pollard foresees massive change in the industry.

“I just want to see a level playing field so we can all get on with running our businesses,” he said. “The industry is going to change so much in the next 18 months, but I can only see online getting bigger and stronger.”