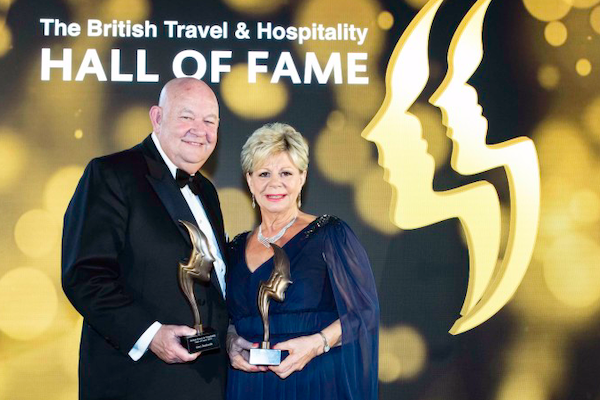 Gary and Rita Beckwith, founders of City Cruises, were “amazed” when they heard that they were to be inducted into the British Travel and Hospitality Hall of Fame.

The husband-and-wife team were among six industry leaders who joined the Hall of Fame during a ceremony in London on Monday night (April 29).

Rita said: “We were flabbergasted when we heard. And we were blown away by the awards evening – we will always remember last night.”

As well as building a successful business – running sightseeing cruises in London, Poole and York – they have worked with industry bodies such as Etoa, the European Tourism Association; UKinbound; and the Association of Women Travel Executives.

Gary said networking is part of their success, adding: “I will go the opening of an envelope.”

They are no strangers to awards, either, as Gary was awarded an honorary doctorate for his contribution to the business world and supporting young entrepreneurs, and Rita received the OBE for services to the tourism industry and the regeneration of London’s Docklands.

“We have enjoyed making a difference in the industry,” said Rita.

“It was just part of what we did – working morning, noon and night.”

The family business can trace its roots to the 1970s, with a barge supplying fuel to pleasure boats on the Thames, and they acquired their first sightseeing vessel, The King, in 1985.

They also raised a family, and son Matthew and daughter Lucy are directors with the company – and now 28-week-old grandson, Alfie, is keeping them busy too.

The company has expanded to about 300 members of staff, and more than four million passengers a year.

“We have had 43 years of growth, and have seen recessions, disasters and terrorism,” said Gary.

“Tourism will see a blip for a while but then it comes back, and London is resilient.”

They are not as closely involved in the day-to-day running of the business, having recruited expertise from the likes of managing director Kyle Haughton.

But they still keep a keen eye on many aspects of the business, including the launch tonight (May 1) of a new vessel named the Erasmus.

• Other industry figures inducted into the British Travel and Hospitality Hall of Fame on Monday were: Frank Del Rio, chief executive of Norwegian Cruise Line Holdings; the co-owners of AmaWaterways, Kristin Karst and Rudi Schreiner; and Bea Tollman, founder of the Red Carnation Hotel Collection.

The Hall of Fame is part of Jacobs Media Group, which includes Travel Weekly and hotel and hospitality-focused publication The Caterer.

For more about the Hall of Fame, click here.