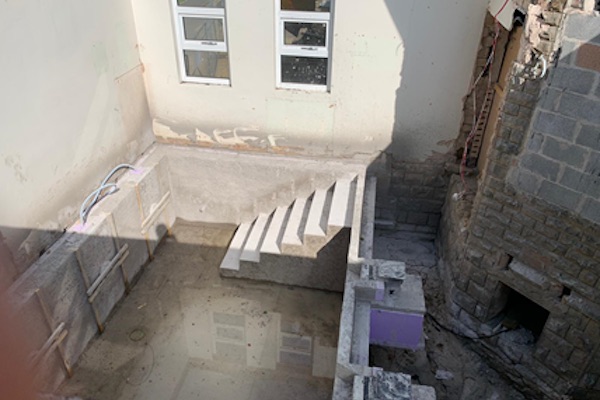 Reuben’s Retreat said it is making “startling progress” during the latest phase of development at the charity’s headquarters in Glossop, Derbyshire.

Just five weeks into the latest development plan, the steps have been built for the hydrotherapy pool (pictured), which will be completed in 25 weeks’ time.

Other works at the derelict Victorian building, formerly Woods Hospital, have uncovered attractive brickwork that has been hidden for decades, and parquet flooring which can be re-used.

Phases four, five and six of the charity’s project are expected to be complete by late autumn, at a cost of around £900,000.

As well as the hydrotherapy pool, the building work will create activity zones – including sensory, play and chill-out areas – and a kitchen, office and reception area.

The charity was formed in 2012 by industry professionals Nicola and Mike Graham in memory of their son Reuben, who died of a rare brain tumour aged 23 months.

Nicola said: “The hydrotherapy pool will be an incredible resource that will bring a huge range of benefits to life-limited children and their families, such as pain relief, increased mobility and relaxation or sensory stimulation.”

She said the charity’s support services and activities are continuing unaffected during the building works.

“We are receiving new requests for help every week. In particular, our monthly get-togethers for parents and carers are thriving,” she said.

Travel Weekly is supporting the inaugural MSC Cup on May 22, with football teams from across the industry set to battle it out at Chelsea FC’s Stamford Bridge stadium. Money raised from entry fees and sponsorship will support Reuben’s Retreat.

Building starts on next phase of works at Reuben’s Retreat