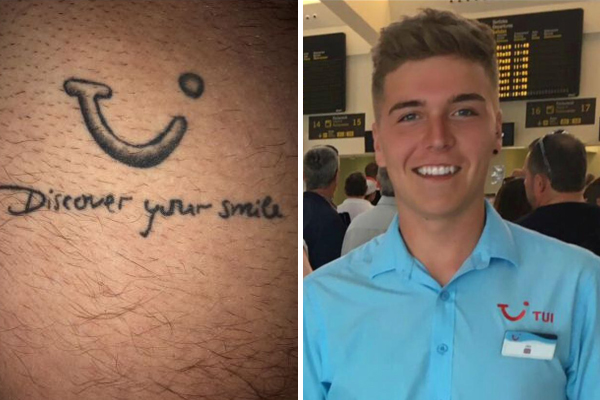 A Tui agent has taken company loyalty to a new level after he got a tattoo of the firm’s logo on his leg.

Jake Fletcher, who works at Tui’s Hinckley branch in Leicestershire, sports the travel giant’s iconic logo on his upper thigh, coupled with the tagline ‘Discover your smile’.

Fletcher decided to have the tattoo while working as an overseas rep for Tui in the Balearics and Canaries in 2017, as Thomson was undergoing the rebrand to Tui.

It measures about 10cm in width and 8cm in height.

He said: “I was sober at the time and it was just after we were given our placements. After my first season in Menorca, my friend and I wanted placements in Tenerife. When we got what we wanted we decided to celebrate.

“We were in such good spirits, so we went and got the Tui smile tattooed on us. It’s on the very top of my leg. I don’t regret it at all.”

He added: “Funnily enough, my friend who also got one, now works for [rival] Thomas Cook.”

Jake’s passion for the brand has stayed with him throughout his travel career, even coming up when he was interviewed to start working in retail as an agent.

He said: “I said I was so passionate about the company that I had a tattoo on my leg.”

He stressed the tattoo did not land him the job, but rather his skillset and professionalism, adding: “It’s a good talking point”.

Tui’s retail staff are allowed visible tattoos as long as they are not offensive. A spokeswoman said: “We think it’s great that a member of our retail team has decided to get a tatt-Tui! They should absolutely wear their Tui smile with pride.”

Jake, who is shortlisted in the Young Agent of the Year category in Travel Weekly’s Agent Achievement Awards has two other tattoos, including a pizza on his foot to mark his former job at Domino’s Pizza.