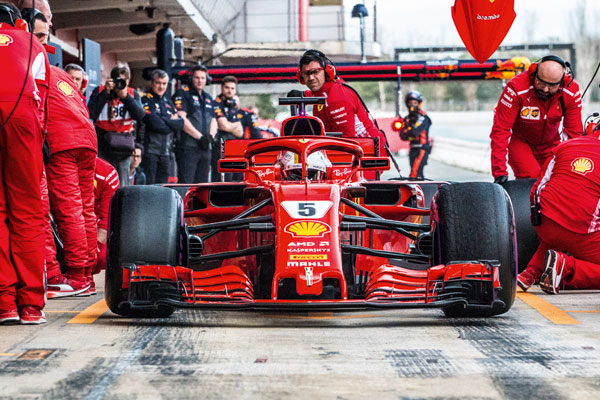 Get Formula One fans closer to the action with a grand prix getaway, says David Golledge as he goes trackside in Spain.

When world champion Lewis Hamilton’s Mercedes shot past our minibus at more than 200mph, it became clear this would be no ordinary tour.

But then the Formula One winter test at Circuit de Barcelona-Catalunya is no ordinary race. It’s the first time the new season’s cars meet the track after a winter spent hibernating in garages and wind tunnels.

You would be forgiven for assuming a non-racing test event could interest only the most hardcore F1 fans, but with far better access than on race days, there’s much to entice more-casual observers.

The Montjuic Club suite, directly above the pit lane, was our base for the day on an agent fam trip hosted by specialist operator Grandstand Motor Sports. A klaxon sounded each time a car neared, which set off a buzz of excitement on the suite’s balcony, so close to the action it felt like you could reach out and touch the mechanics below. We saw sparks fly as the cars zoomed off, smelled rubber when they screeched to brake, and heard the mighty roar from the powerful engines.

Catching some of the F1 test action on the @GrandstandMS agent fam! Here’s Ferrari’s Vettle heading out pic.twitter.com/eRuAmct7qV

Perhaps the most exclusive vantage point of all was getting an exclusive peek inside one of the team garages – a real treat, as access is not normally included on the itinerary. Jacked up high, the car dominated attention in the space-age garage, with a dozen mechanics fine-tuning it and just as many glued to performance monitors.

When the teams paused for lunch, we grabbed the opportunity to stretch our legs on a pit lane walk past the garages. As reigning champions, Mercedes had the pick of locations and was the first in line.

Yet it was access to the paddock that truly excited committed fans. This inner sanctum is where the team’s motorhomes are situated, and competition for the most extravagant is as intense as the track action. Eagle-eyed fans can spot current drivers and legends from years gone by (the giveaway is the driving shoes, apparently).

With 21 races during the Formula One season, there’s huge potential for repeat custom as well as special-occasion bookings for any agent keen to get
up to speed with the world of motor sports.

Book it: Grandstand Motor Sports offers packages to major motor sports
events worldwide. A three-night package to the Italian Grand Prix on September 8 starts at £819, including flights from Gatwick to Milan, B&B accommodation in Lake Como, airport transfers and transport to Monza on Saturday and Sunday.
grandstandmotorsports.co.uk

One-off weekends: 10 of the best
Escorted tours in Ireland
Hen and stag weekends for any budget