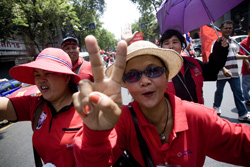 The Foreign Office (FCO) has reviewed its travel advice to Thailand following escalating political turmoil over the weekend, and warnings of bomb threats.

Red Shirt protestors, who oppose the Thai government and who closed down Bangkok’s two airports at the end of 2008, marched on the capital over the weekend and demanded the dissolution of the Thai parliament by midday local time today.

Thai prime minister Abhisit Vejjajiva has refused to meet the protestors’ demands leading to a tense, but so far peaceful, stand-off between about 100,000 protestors and 50,000 police and military personnel on the capital’s streets.

The demonstrators have said they will remain in Bangkok for the time being, although they will move to different locations.

Vejjajiva has also warned of intelligence indicating bomb or grenade attacks in Bangkok and around the country, and has invoked the International Security Act until March 23, allowing the implementation of additional security measures.

As a result of the problems, the FCO is warning British nationals to avoid areas targeted by the protestors and to exercise extreme caution when travelling around Bangkok.

Should violence break out, travellers are being advised to remain indoors and monitor the situation online. Brits are also being reminded to keep their passports on them at all times, a legal requirement of the country, in the light of increased security checks, which will also slow travel.