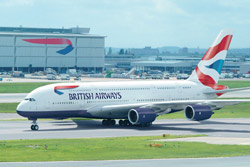 Tomorrow’s planned strike between British Airways cabin crew will go ahead after talks between the airline and the Unite union collapsed.

The strike will last for three days, while a second four-day strike is sceheduled to start on March 27.

A BA spokeswoman added: “We are very disappointed that, despite lengthy negotiations, Unite has rejected the chance of a settlement and resolved that its strikes should go ahead.

“We are confident our cabin crew would accept our latest offer if Unite put it to them.

“In recent days, we have shown considerable flexibility in the interests of protecting customers from the effects of this completely unjustified industrial action.

“We have put forward proposals that would secure long-term pay protection for all existing crew, new opportunities for crew at Gatwick and modernisation of our industrial relations framework.

“Despite the recognition by the High Court that our changes to onboard crew numbers were valid and reasonable, we have also been prepared to make some modification to these changes to allow Unite to call off the strikes.

“It is a great pity that Unite continues to show such disregard for the interests of our customers and our business – and for public opinion at large.

“We will continue to strengthen our contingency plans to ensure that as many customers as possible can fly to their destinations during the strike period.

“We know that many cabin crew will work normally in the days ahead, and we look forward to their contribution – and that of tens of thousands of colleagues across the airline – as we keep our customers and our aircraft flying.”

The airline has contingency plans in place and has already said as many as 65% of its customers should be able to fly over the forthcoming weekend.

However, unions across the world have come out in support of the Unite members with both French and US unions announcing plans to assist them.

This is a feed from Google News

http://news.google.com/news?pz=1&cf=all&ned=uk&hl=en&ncl=dUKmzaYwhVkE5IMYLLu9nUsVnytlM&output=rss This is an RSS feed from Google News