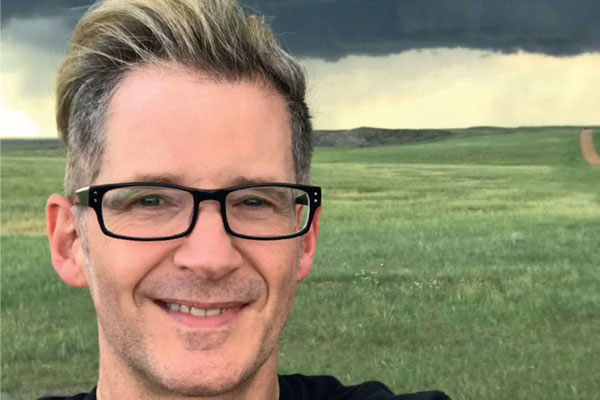 Kevin has a rather unusual hobby – he likes chasing storms. Fresh from returning from his seventh chase in the US, the senior consultant at Traveltalk in Harrogate and Global Travel Group agent talks to Benjamin Coren.

Q. How did you get into travel?
A. I have been with Traveltalk for 20 years but I have been in the trade since 1987, with Lunn Poly, Pickfords and Thomas Cook. Since I was a child, I always had a deep-rooted love and fascination for travel and remember as a ‘life moment’ the huge excitement of going abroad for the first time, at the age of 11, to Poniente Beach in Benidorm. It was a week I will never forget and one that made a big impression and impact on me. I knew then that when I grew up, I wanted to become a travel agent, and to help people fulfil holiday ambitions and dreams.

Q. How did you get into storm chasing?
A. From around the age of six or seven, I was out in the garden and I had a fascination with what was going on in the sky, so I’ve been interested in severe weather and storms since I was a child. It wasn’t until I got older that I discovered you could join tours to see these amazing storms. I saw a man named Roger Hill on the National Geographic channel, who runs Silver Lining Tours. He is listed by Guinness World Records as the person who has reported and documented the most sightings of tornadoes – more than 650. After seeing him on TV, I wanted to chase with him; he is well-respected as a real professional in the chasing community.

Q. Do you sell storm-chasing tours?
A. No, I don’t sell these tours to customers. It says on our website that I have an interest in storm chasing, but no one has enquired as yet. The other thing is, they are difficult to sell. There’s no Atol protection, as the companies you book with are based in the US, and it’s something people tend to book direct with a specialist. These tour companies keep you at a safe distance but there is a lot of danger to it. I don’t think any insurers cover you for storm chasing as it’s considered an act of God, so for us to sell it would be very difficult. A six-day tour starts from around $2,600 including accommodation, breakfasts and the expertise of meteorologists, but flights and other meals are extra. Ten‑day tours on the same basis start from $3,700.

Q. Where do you see them?
A. ‘Tornado Alley’ in the American Midwest is a concentrated area of activity. States to view them include Oklahoma, Kansas, Texas, North and South Dakota, Wyoming, Nebraska, New Mexico and Colorado. These states are the best for it and all of the operators are based there during the season, which runs from May to the start of July.

Q. What happens if there are no storms?
A. Most of the time there’s no down days, so you don’t see anything culturally. However, when there’s no storm activity the company will organise trips to museums or historic parts of town. One time they took us to see waterfalls in Texas and we went to a baseball match. It’s not a case of once you’re there, you sit and wait. They make sure you head to different areas and you follow storms. There are target areas and you move to where storms develop.

Q. Have you seen the 1996 film Twister?
A. Twister did a lot to build interest in storm chasing. Some of the tour specialists ask customers how they became interested in storms and a lot of first-timers say it’s because they’d seen Twister. The film has really raised the profile of storm chasing. I’ve even been to the Twister the Movie Museum in Wakita. It was set up by a lady who lives in the town and features props and sets from the film. The film was shot in the town and they actually put up a purpose-built set to destroy in the town. 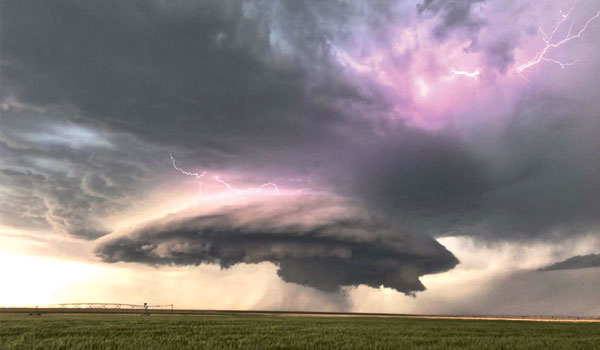 What’s your most memorable storm chase?

In May 2016, there was a multi-tornado outbreak in Kansas and we saw 15 tornadoes in one day. We also got so close to a storm in 2015 that you could feel the air pressure drop in your ears. It was about 500 to 600 metres away and we had to shift it at that point.

There are three colour codes for chase day: green means no chase, yellow means there is anticipated activity and red means the chase is on.

You have to be really into it as you can be on the road all day. Last year, I did a six-day tour out of Denver and we travelled just short of 7,000 miles. You have to be there to experience and feel it to understand why I go back year after year.

It’s mindblowing and truly breathtaking. You feel the storm, there’s lightning and you can even get something called ‘hail roar’. This occurs when hail is held aloft in the clouds and it collides, creating a faint roar. We’ve been though some amazing hailstorms. One year the storm whitened the road and they had to get snowploughs out.