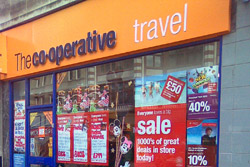 Co-operative Travel boss Mike Greenacre has revealed the retailer could open up to 150 shops over the next four years.

If approved by the Co-operative Group board, the proposal could see the UK’s largest independent travel agency chain growing its network to up to 650 to 700 shops, giving it national reach to rival the big two.

Greenacre said even including Midcounties and Midlands Co-ops shops, which are part of the Co-operative Travel Trading Group, the Co-op chain had about 250 fewer outlets than the Tui Travel and Thomas Cook networks.

“We have recently completed some work on what a national footprint for the Co-operative Travel would look like and while we’re dominant in the north and the Midlands, everywhere between Merseyside and Hull, we have identified some clear gaps.

“We can still see some glaring Co-op deserts in the south-west, south-east, Home Counties, parts of Scotland and parts of Wales.”

Greenacre revealed he and his team had been “working out exactly where these locations might be”.

“We have been through the strategic thinking and identified well over 100 sites that meet the criteria for opening a Co-op travel agency.”

Greenacre stressed the plans were subject to securing the green light and required investment from the wider group.

“The challenge we have is we will be vying for capital against all the other Co-op groups like food and pharmacy,” he said.

“We haven’t presented our plan to the executive yet but will be arguing the case to grow our network soon.”

Greenacre said there were a number of reasons for the planned expansion.

“We know how profitable our retail chain is. It’s also the branch network that will sell packages, and with our new tour operation it’s much easier to put your own product in your own new shop from day one.”

Greenacre said Co-operative Travel’s preference would be to open brand-new shops, rather than acquire existing stores.

The news comes just a week after Thomas Cook revealed up to 30 new Going Places stores could be opened and amid a flurry of new store developments from independents and brands such as Kuoni, Virgin and Teletext Holidays.

Manny Fontenla-Novoa, Cook chief executive, said: “Everyone was predicting the death of the package holiday and of the high street, but we have continued to invest in a multi-channelled strategy.”

He added that the Cook retail estate could contract to as few as 650 shops or remain at 800 over the next five years depending on consumer trends.