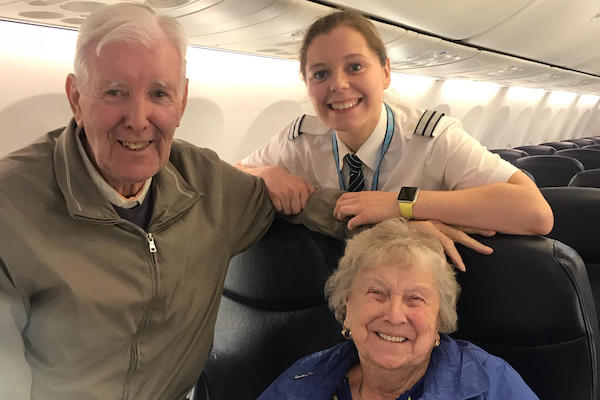 Tui customers Pat and Ray Wilmot had the surprise of their lives when the pilot of their plane introduced herself – and it turned out to be their granddaughter.

The special moment happened as they boarded their flight from East Midlands airport to Palma last month.

Tui Airways pilot Laura Gibson had liaised with the airline’s rostering team to ensure she could fly the service to Palma on which her grandparents were flying.

Pat (79) and Ray (83) have holidayed at the Grupotel Playa Camp De Mar twice a year for more than seven years.

It was Laura’s parents’ idea to plan the surprise encounter and combine Wilmots’ love of Tui holidays with the pride of their granddaughter being a Tui pilot.

The previous airline at which Laura worked did not have the mobility facilities needed by her grandparents, so when she joined Tui in November, it meant the family could arrange the special surprise meeting.

Laura said: “My granny didn’t even recognise me at first. She was very polite when she said hello, then realised it was me and gave me a huge hug. It was such a special moment.”

Pat and Ray said they are “unbelievably proud” of Laura’s career as a pilot, which began with her first flying lesson in a flight simulator for her 18th birthday.

As one of the youngest of 970 Tui Airways pilots, Laura flies to destinations around the world and is a few air miles away from being promoted to first officer.