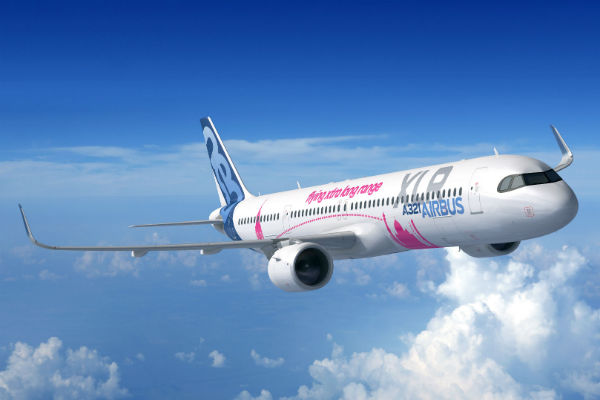 An extra long-range version of the A320 family of narrow-body jets was unveiled by Airbus yesterday at the Paris Air Show.

The A321XLR was launched with 31 orders from from Air Lease Corporation and Middle East Airlines.

The A321XLR claims to offer the longest-range capability of any single-aisle aircraft, covering distances of up to 4,700 nautical miles.

The aircraft has been designed as the next “evolutionary step” in response to demand from airlines for even more range while offering 30% lower fuel burn per seat than previous-generation rivals.

Airbus said: “With this added range, airlines will be able to operate a lower-cost single-aisle aircraft on longer and less heavily travelled routes – many of which can now only be served by larger and less efficient wide-body aircraft.

“This will enable operators to open new worldwide routes such as India to Europe or China to Australia, as well as further extending the family’s non-stop reach on direct transatlantic flights between continental Europe and the Americas.”

It shares commonality with the other A320neo family aircraft for pilots, cabin crew and mechanics along with significant spares commonalty with the A321LR.

Deliveries to Air Lease Corporation are planned from 2023.

Air Lease Corporation executive chairman Steven Udvar-Hazy said: “We’ve had tremendous success with the A321LR long-range version; now with the A321XLR, we will open a whole new dimension of routes up to nine hours of flight time.

“For example, you could travel from Barcelona to Chicago; from Texas or Florida to anywhere in South America – including Chile, Argentina and Brazil.”

Airbus chief commercial officer Christian Scherer said the leasing company’s A321XLR decision marked “another historical milestone in our relationship with ALC and for the industry at large”.

The A320neo family claims to be the world’s best-selling single aisle aircraft with over 6,500 orders from more than 100 customers since its launch in 2010.