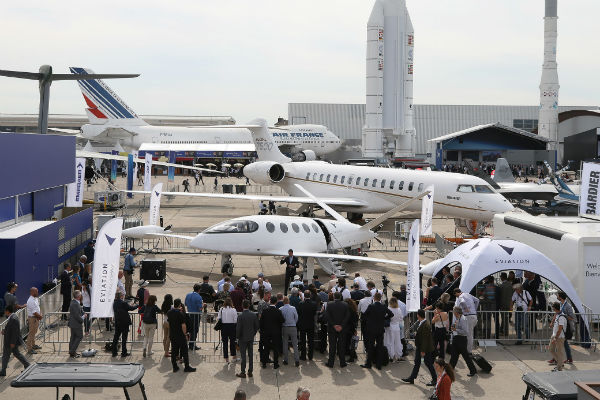 An electric-plane maker has received its first order from an airline.

Other prospective customers include major US carriers such as United and JetBlue, which are interested in aircraft to feed their hubs.

Evaition hopes to gain certification for Alice, which uses batteries to power three electric motors on its wingtips and tail, in 2021, with the aircraft entering into commercial service the following year after test flights.

The company predicts that it may not be able to keep up with orders in a few years time.

Chief executive Omer Bar-Yohay said at the Paris Air Show: “We’ll have a supply issue, not a demand issue.”

The founder of the Israel-based venture capital-backed developer said Cape Air had agreed to buy a “double-digit” number of aircraft.

The carrier has a fleet of 92 Cessna turboprops on routes such as Boston to Martha’s Vineyard and New York to Nantucket.

The Eviation Alice claims a 650-mile range from a single charge.

The company is targeting “middle mile” commuter routes like Paris to Toulouse, Oslo to Trondheim and San Jose to San Diego.

Running costs for the Alice will be about $200 per flight hour versus $1,000 for a turboprop.

The Alice will be slower than some conventional aircraft, with a cruising speed of 240 knots – 276 miles per hour – half the pace of modern business jets but close to some turboprop models.

Bar-Yohay said: “For the first time in over 50 years, Eviation has created a new breed of aircraft fleets and a new era in aviation with the all-electric Alice.

“By securing our first commercial customer with a large and well-respected regional airline such as Cape Air, we have demonstrated and proven Alice as a leader in first-to-market innovation and reliable zero-emission aviation.

“We are beyond thrilled to partner with Cape Air to bring the first all-electric regional aircraft to airports and air passengers across North America as we redesign air travel to make it quieter, cleaner and affordable.”

Cape Air founder and chief executive Dan Wolf said: “We see tremendous opportunities to reduce the environmental impact of our operations, and to help our employees and communities do that as well. Augmenting our fleet with the all-electric Alice aircraft is the next chapter in our future.”

Interest in electric aircraft is growing as the aviation industry comes under criticism for increasing emissions of greenhouse gases.