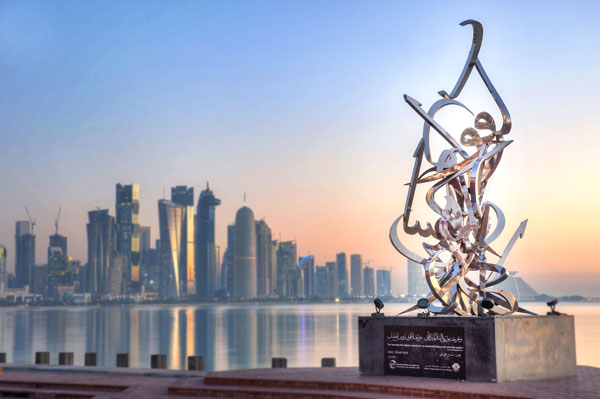 Qatar is rapidly emerging as an ideal stopover spot – but how much can clients squeeze into a flying visit? Rachel Roberts find out.

Dubai may well have a competitor as the perfect sun-drenched stopover destination on long-haul flights out of the UK. Qatar, set on the other side of the Arabian Gulf, boasts 350 miles of uninterrupted coastline, gorgeous unspoilt beaches and the same year-round desert climate – and with dozens of new hotels opening, it should definitely be on your radar.

Capital Doha is home to the luxurious Hamad International airport – expect gold-plated coffee kiosks – which opened in 2014 and is served by airlines including Qatar Airways, British Airways and Cathay Pacific.

But it’s not just about ease of access. The peninsular state of Qatar is rich in Islamic cultural heritage and natural beauty, and the presence of four and five-star hotel brands is also helping to raise Qatar’s profile as a luxury destination.

Major infrastructure projects are well under way to prepare for the 2022 World Cup. The oil-rich country is drawing on its reserves of wealth to build nine stadiums and renovate three existing ones, along with the ambitious £310 million Amphibious 100 Resort, set to accommodate wealthy football fans during the tournament. It will comprise four giant hotels in the shape of superyachts, plus underwater rooms and an interactive marine-life museum.

Yet even before the football kicks off, there are plenty of highlights to fill a 24 or 48-hour stopover in Doha. Here are just a few of our suggestions. 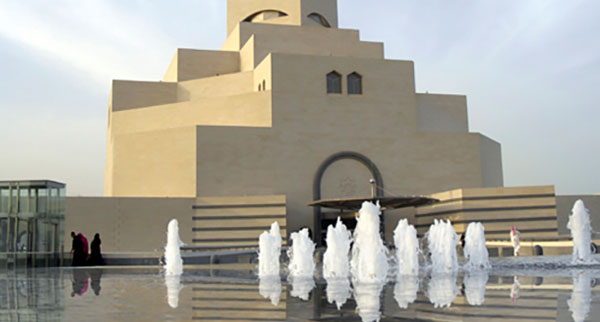 The museum, perched on the end of Doha’s famous Corniche – a four-mile palm-fringed promenade hugging Doha Bay – is a work of art in itself. Reminiscent of a modern cubist-style mosque, the building was designed by renowned Chinese-American architect IM Pei and opened in 2008. The collection spans 14 centuries of the Islamic world’s finest art and artefacts, including prized examples of delicate Arabic calligraphy, Persian war masks, rare textiles owned by royals, and colourful ceramics produced during the Ottoman Empire. 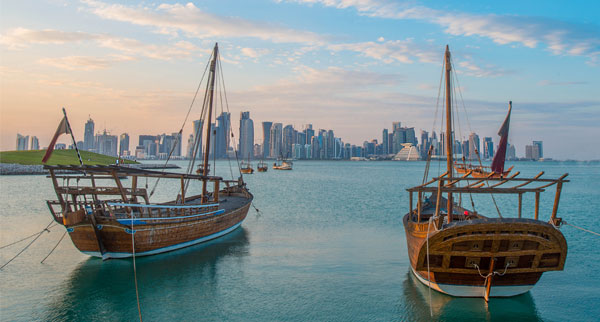 A night-time cruise on a traditional dhow boat, its billowing lateen sails whisking you out into the bay, is a memorable way to see Doha’s impressive West Bay skyline. The densely packed arc of modern-day skyscrapers – including the 300m-high Aspire Tower and Qatar World Trade Centre, with its futuristic protruding UFO-shaped disc – is illuminated in an array of vivid colours when darkness falls. We tucked in to a delicious Arabian feast prepared on board as musicians playing Qatari sea songs on traditional instruments provided an atmospheric soundtrack to the evening.

A stone’s throw from the Corniche, this souk (which translates as ‘standing market’) is where the Bedouin people would have traded livestock and spices a century ago. It has been faithfully restored and today is a major tourist attraction. We visited in the evening and took a leisurely – and refreshingly hassle-free – wander through its maze of shops selling pearls (once Qatar’s main industry), antiques and oud, an incense and perfume made from agarwood. Qataris sat outside under canopies, smoking shisha and drinking chai karak tea.

The Falcon Hospital is a must-see too. Falconry is an important part of Middle Eastern culture, and around 150 of the birds are treated in the specialist hospital every day. The waiting room, filled with majestic falcons patiently awaiting their turn to see the vet, is a remarkable sight.

Set above an ancient pearl-diving site, and nicknamed the ‘Arabian Riviera’, this man-made island off Doha’s West Bay coast covers 400 hectares and is fronted by 12 miles of dazzling white beaches. It features Mediterranean-style yacht marinas, and upmarket restaurants and shopping, with expats living in its residential towers, designed to look like a string of pearls.

This impressive complex sits halfway between the gleaming skyscrapers of Doha’s West Bay and the Pearl-Qatar. Since its opening in 2010, Katara has fast become the beating heart of Qatar’s creative scene. For art lovers, the village offers dozens of galleries showcasing the work of international and local painters, photographers and sculptors. It’s also home to a marble amphitheatre, which hosts music performances, traditional dance shows and open-air movie screenings. However, the Masjid of Katara is the real gem. We watched as the faithful went into the ornate mosque for prayers, its turquoise and purple mosaic-covered exterior glinting in the late afternoon sun.

Lying 40 miles from Doha is the Unesco-recognised natural reserve Khor Al Adaid, where the sea has forged its way deep into the heart of the desert. The only way to access it is across rolling sand dunes, as we experienced with Q Tours, one of several companies offering exhilarating dune-bashing rides. When the sparkling sea suddenly appeared, mirage-like, on the horizon, it was a magical and unforgettable sight. 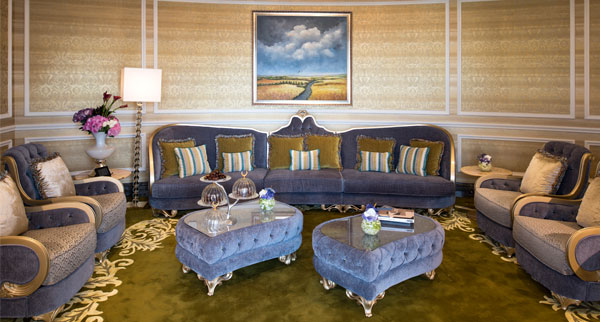 Marsa Malaz Kempinski The Pearl: The 281-room Kempinski was the first five-star hotel to open on The Pearl, but its USP is its standout spa facilities. The Spa by Clarins is a destination in itself and includes 23 treatment rooms, plus saunas and indoor plunge pools. Deluxe rooms start at £195.

Crowne Plaza Doha – The Business Park: Aimed at the business traveller, this modern, 317-room hotel is just seven-and-a-half miles from the airport and 15 minutes from the city centre. Deluxe rooms start at £91. 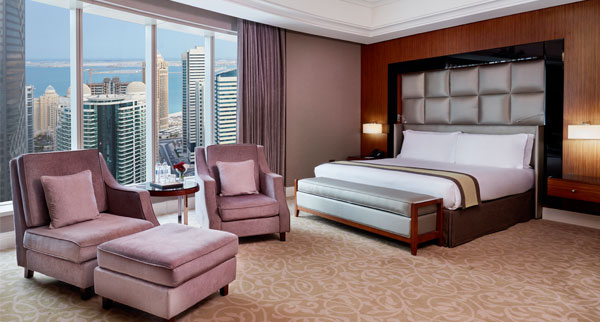 find out more Learn more about Qatar and its stopover programme by visiting the Qatar National Tourism Council site.
visitqatar.qa