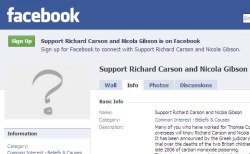 Members of a Facebook group supporting the two Thomas Cook reps on trial in Corfu have welcomed the not guilty verdict and reiterated that they should never have been targeted.

Richard Carson and Nicola Gibson were cleared of manslaughter in relation to the deaths of Christianne Shepherd, seven, and her six-year-old brother Robert, from Wakefield, West Yorkshire. The children died after a faulty boiler leaked gas into their Corfu bungalow in October 2006.

The ‘Support Richard Carson and Nicola Gibson’ group has attracted more than 5,000 members on the social networking site since it was announced that the reps would have to stand trial.

Those who have signed up include Abta chairman John McEwan and Advantage leisure director Julia Lo Bue-Said.

Members welcomed the verdict, but said their thoughts were with the parents of the two children.

Adam Carr wrote: “Over the moon that they have been found not guilty, we can never forget the children who lost the lives but justice has been done to the hotel and maintenance management team.”

Moni Monaghan said: “Congratulations Nicola and Richard on the verdict. Let’s hope you can try and carry on with your lives and put this terrible time behind you. Hopefully these two beautiful children have not died in vain but valuable lessons are learned by hoteliers and tour operators.”

Lyndsey Hyde added: “Justice has been done, and everyone who has ever been involved in the repping world gave a sigh of relief for Richard and Nicola.”

Emma Baxter, a former Thomas Cook rep who worked with Richard Carson and who set up the Facebook site with Travel Weekly reporter Rupert Murray said:

“When I started the group two years ago with Rupert I never dreamed it would take this long for Richard and Nicola to be vindicated but thankfully the day has finally come and they can try to get on with their lives once more.

“Those people who have worked overseas know this tragedy should never have been blamed on these two. Richard was one of the most hard working people I’ve ever met and I couldnt be happier that he and Nicola have finally been set free from this.

“Hopefully the family will find some peace now that the right people have been found guilty. More than 5,000 people joined the group in the end showing the enormous support these two had and I want to thank everyone who joined, commented, and helped raise awareness of the group.”