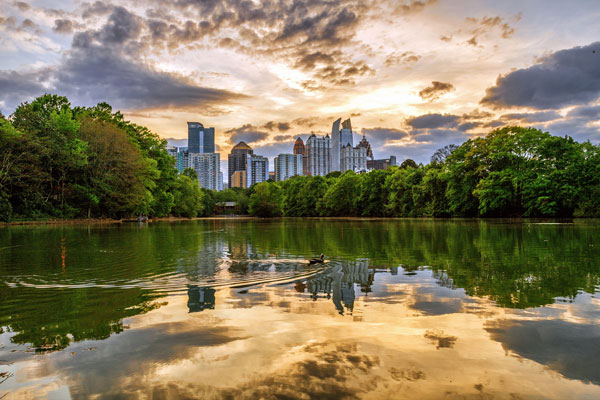 Atlanta is a gateway into the history, heritage and music of the Deep South, discovers David Whitley.

The sprawling de facto capital of the south might not make for the most obvious US city break. Atlanta can be intimidatingly large, and doesn’t have the good looks of San Francisco or Boston, or the hip cachet of Austin or Portland.

But what it does have is a genuinely impressive array of top-quality attractions, and an important place in American history, particularly when it comes to the civil rights movement.

The city is changing too. Several new developments have made it less car-centric, bringing slices of walkable urban cool to a city that was always happy to be a loose collection of suburbs.

But Atlanta is also well placed for road trips of the American South, whether you fancy mountain retreats, the music-thrumming cities of Tennessee, handsome coastal towns or historic landmarks. 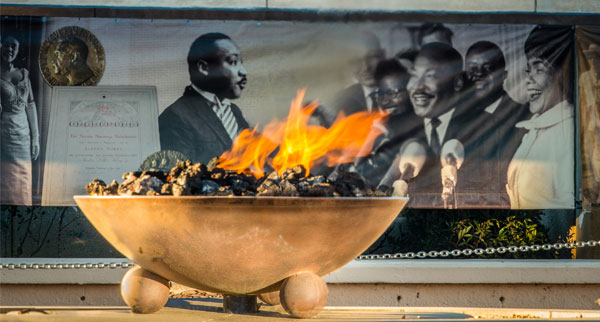 You could easily visit Atlanta without bothering to make a checklist of attractions – the quality and variety is superb. But priority should be given to the Martin Luther King National Historic Park, a collection of buildings and museums linked to the civil rights leader. The Visitor Center and King Center, in particular, do a brilliant job of describing the key events of the civil rights struggle, and even today can trigger genuine anger at the way the politicians of the southern US attempted to retain white supremacy.

Not too far away, and connected by a leafy walking trail, is the Jimmy Carter Presidential Library and Museum. This tells the story of Carter and his presidency and is a fascinating time capsule of the era as a whole. There are also hefty chunks on the post‑presidency work Carter has done on disease eradication and election monitoring programmes.

Close by is the Beltline, a former train line turned into a walking and cycling route. Lots of bars and restaurants are opening near it, changing perceptions of Atlanta. But the most impressive development is Ponce City Market, where a gigantic former department store and warehouse has been filled with food stalls and indie shops. The rooftop plays host to fairground games, mini golf and a giant slide.

Most of the major highlights are based around the Centennial Olympic Park downtown, though. For those planning to tackle a lot of them, the CityPass, from around £63, covers the Georgia Aquarium, the World of Coca-Cola, the CNN Studio Tour, Zoo Atlanta, the National Center for Civil and Human Rights, the Fernbank Museum of Natural History and the College Football Hall of Fame.

The CNN Studio Tour heads behind the scenes at the world’s first cable news network, showing how coverage is co-ordinated, news is gathered and multiple studios are put into use.

The World of Coca-Cola tells the tale of the Atlanta pharmacist’s tincture that became a global soft drink behemoth. It’s a little biased, but the grand finale where you can taste 100 weird and wonderful Coca‑Cola products from around the world is undeniably enjoyable.

The top choice among the others is the National Center for Civil and Human Rights, which rehashes some of the Martin Luther King Jr story, but is relentlessly thought‑provoking when it moves on to human rights activism around the world.

But Atlanta isn’t the only jewel in the region’s crown. Heading north, the Dahlonega Wine Country makes for an indulgent stopover on the way to the Great Smoky Mountains National Park. It’s a popular park for a reason, with a marvellous mix of mountain views, hiking trails, picturesque streams and wildlife-spotting opportunities. Just north of the park is Dollywood – Dolly Parton’s theme park, and a masterclass in kitsch.

From there, country music capital Nashville is not too far away. The Grand Ole Opry is the classic spot for live music, while the Country Music Hall of Fame should pull in cowboy boots and banjo lovers. 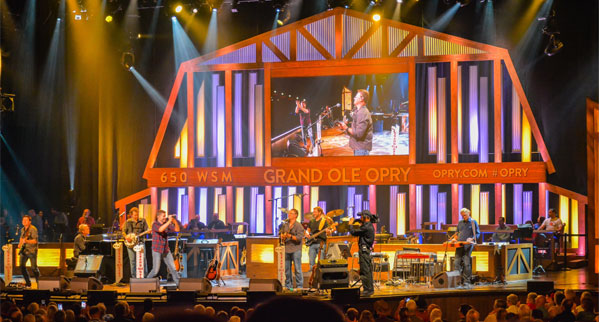 Further east is Tennessee’s other musical hotspot, Memphis. This is where you can visit Elvis’s Graceland mansion and have a lively night out in the renowned bars of Beale Street. There’s also the legendary Sun Studio where Elvis, Johnny Cash and more recorded, plus the Memphis Rock ‘n’ Soul Museum.

It’s not just about the music, of course. The National Civil Rights Museum links into a theme that can provide the backbone of a road trip through the Deep South.

And at Rosa Parks Museum in Montgomery, Alabama, visitors can learn more about the bus boycott that sparked the civil rights movement as a whole.

Other key civil rights sites can be found in Sumner, Mississippi, where the Emmett Till murder trial was held, and Selma, Alabama, the focal point of marches for the right to vote. More in‑depth information and itinerary suggestions linked to the theme can be found at the Civil Rights Trail website.

Just east of Atlanta, college town Athens – home of REM – has a fabulous State Botanical Garden and a fantastic array of craft beer bars. A little farther along, Augusta is a golfer’s pilgrimage site: the Augusta National Golf Club is where the US Masters is held.

Over on the coast are two grand old dames, including charming Charleston – all 18th-century houses and intriguing museums – and the equally historic Savannah. It brims with heritage mansions and is home to the Bonaventure Cemetery, plus museums covering everything from the prohibition era to African art. Boat rides out to the coastal islands, which are hotspots for birdwatching, are available too.

If driving between the two (it takes just over two hours), a beachy stop for a night or two at Hilton Head Island is a good bet.

Many of Atlanta’s hotels are in the richer northern suburbs. The Whitley, in shop and restaurant-packed Buckhead, is a fine example. There’s a sizeable pool, a house car service that’ll take you anywhere within a couple of miles, and stately, spacious rooms with light flora and fauna-themed decor. Rooms cost from around £100.

For somewhere close to the Beltline action, the Hotel Clermont has had a hip makeover, with mirrors essentially pieces of glass art and big animal images on the cushions. Expect to pay from around £100.

Midtown offers a halfway house, with plenty of arts venues around. The new AC by Marriott is a safe choice – all calming light woods, plus a rooftop bar and pool. Doubles from around £187.

Atlanta Hartfield-Jackson is one of the biggest airports in the world, and the main hub for the south of the US. Delta Air Lines is based there, and offers connecting flights to pretty much anywhere you could imagine (and several you can’t). Given the codeshare agreement with Virgin Atlantic – which flies to Atlanta from Heathrow and Manchester – the city is a useful entry point for multi-city US itineraries. Delta and British Airways also fly to Atlanta direct from Heathrow.

A word of warning: if connecting to a domestic flight at Atlanta, leave plenty of time – a two-hour gap between flights should be considered the absolute minimum. Immigration has to be cleared, cases have to be collected and then checked in again, and the shuttle bus ride between terminals can take 20 minutes.

North America Travel Service offers a 15-night fly-drive visiting Atlanta, Memphis, Nashville, the Great Smoky Mountains, Charleston, Savannah and beyond from £2,385 per person, based on two adults sharing in low season, and including car rental and flights.
northamericatravelservice.co.uk

The Inspiring Travel Company has a nine-night Totally Tennessee fly-drive tour from Atlanta to Memphis from £2,489 per person, including accommodation, flights and car hire.
inspiringtravelcompany.co.uk

A wealth of history: Heritage hotels in the US
Honeymoons in the USA
Adventures in America’s wild west