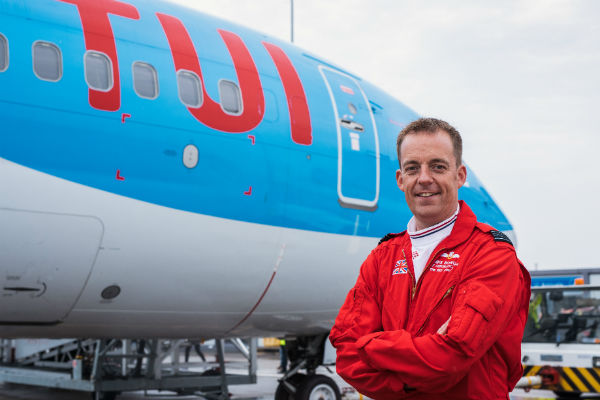 A Tui Airways pilot is having the summer off – to fly with the Red Arrows.

Mike Bowden, who joined the airline last year as a first officer, is returning to the RAF air display team to perform aerobatics for one last time.

The carrier has released him from his commercial flying duties to step in for a Red Arrows pilot who was injured playing football ahead of the season.

Bowden joined the RAF in 2002 and undertook various flying duties including four seasons with the Red Arrows.

He joined Tui Airways in October last year and has flown a Boeing 737 on routes from Cardiff.

Tui Airways managing director Dawn Wilson said: “We are delighted that Mike could step in and complete the Red Arrows team for their 2019 season.

“The talent and skill of the Red Arrows is outstanding and we know their breath-taking displays are helping inspire the next generation of pilots.

“Tui Airways is lucky to have Mike as part of our flight crew team of 970 pilots and I know our team in Cardiff are looking forward to welcoming him back and hearing the stories of his summer adventures.”

Bowden added: “Although it is an unexpected return to the Red Arrows, it is always a privilege to represent the United Kingdom at home and overseas with aerobatic shows that demonstrate the best of British.

“However, whether flying Tui Airways’ customers on holiday or displaying in front of big crowds with the Red Arrows, I believe aviation is a shared, common language and the teamwork involved – both in the air and on the ground – can help inspire people of all ages and backgrounds.

“I’m extremely grateful to all those colleagues at Tui Airways who have been so supportive and allowed my temporary return to the Red Arrows for the 2019 display season.”