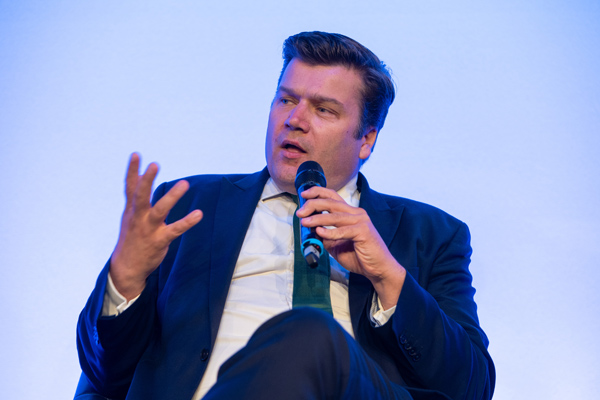 The industry must act faster to ‘de-carbonise’ and cut plastics in response to increasing environmental concerns, corporate travel leaders have been told.

Conservative MP James Heappey (pictured) challenged members of the Business Travel Association (BTA), formerly the Guild of Travel Management Companies, saying: “Where do you sit on the growing challenge of de carbonisation?”

He hit out at airlines for not cutting single-use plastics from flights, saying: “You should not have to fly business class to have a plastic-free flight. It’s an outrage that when you get on a night flight there are 400 blankets wrapped in plastic and 400 pairs of headphones in plastic.”

The industry must act because flying “is at odds” with the need to reduce carbon use, he said, arguing: “We have to make the case for travel.”

Heappey insisted: “No one is arguing all flying will cease, but it’s almost impossible to get electric powered long-haul aircraft off the ground.”

He dismissed those, including US president Trump, who dispute evidence for global warming, saying: “Trump talks bollocks on climate.”

Heappey told the BTA: “If you use a long-haul carrier that makes use of single-use plastics and plastic wrappers, that reflects badly on you. Airlines will change if you pull and the government pushes.”

Nikki Rogan, global travel manager at software company Synamedia, told the conference: “Sustainability is high on the roadmap. It’s not driven by travel managers but travellers. A traveller asked me last week, ‘How do I offset?’ It’s not something we’re pushing, it’s something people want.”

Outgoing BTA chief executive Adrian Parkes said: “Sustainability is a challenge for the industry. If we could give better choices and better information at the point of sale we could start to future-proof our industry.”

Dutch carrier KLM launched a campaign calling on passengers to ‘Fly Responsibly’ last week, with chief executive Pieter Elbers saying: “Do you always need to meet face to face? Could you take the train? Could you offset [the carbon emissions]?”

He insisted airlines “have to take a different stance” in face of global warming “to keep our licence to operate”.

Elbers told Travel Weekly: “We are not saying don’t fly. We are saying fly responsibly. Do it but do it considerately.”

He launched the campaign, to run online and in major newspapers worldwide, at an event to mark the centenary of KLM’s founding. A KLM spokeswoman said: “There is a changing mentality among passengers. We want to be the front runner on this.”

However, responding to demands to remove all plastic from flights, Elbers said: “It is almost impossible. We are looking to develop alternatives, but to be mindful about just removing plastic because it means you carry extra fuel.”