Staff at the Welsh-speaking agency are definitely keeping up with the Joneses. Samantha Mayling visits and finds out why it doesn’t need a website.

When the Global Travel Group first suggested Travel Weekly paid a visit to Teithiau Menai Travel, the agency’s website was nowhere to be found.

But, as owner and managing director Ann Jones says, they don’t need one, as lots of clients pop into their shop in the heart of Caernarfon – and they’re very active on Facebook.

“People call me the ‘Facebook queen’,” she says. “It is useful for marketing and has brought in a lot of business.”

Last year was a record one for the agency but it has taken a lot of hard work to build to that.

After working at AT Mays and Luxitours, Ann joined Teithiau Menai Travel 22 years ago. Ten years on, owner George Hills wanted to retire, so Ann bought the agency.

“I was a single mum with two teenage boys. I remortgaged my house and got an advance on my inheritance,” she recalls. “As the owner, it was a 24/7 role – I worked long hours, six days a week.

“It’s taken a lot of sleepless nights, but now we have plenty of repeat customers, as we know what suits them.

“We live in a small community where everyone knows everyone else. They would rather book with us than on the internet.

“It is very rare that we do not know a customer, and it takes years to build up relationships.” 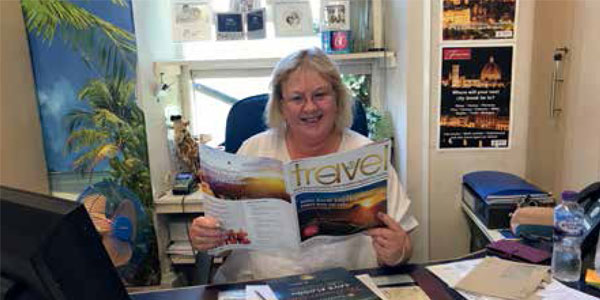 Her staff are Sian Jones (no relation) who has been with her for 18 years, Sion Jones (also no relation) and apprentice Ela Pritchard.

“We do have fun and a great rapport – I think of them as friends,” says Ann.

Being part of Global has helped with many issues, and she enjoys networking alongside Sion at the consortium’s conferences and events.

“Conferences are great for learning about suppliers, getting tips and making friends,” says Ann.

Teithiau Menai Travel (teithiau means ‘travel’) is the only agency in Caernarfon, and with 90% of clients being Welsh speakers, they use Welsh as their first language.

Sian explains: “Customers prefer to deal with us in Welsh, as it’s easier for them to explain what they want. People come from as far as Pwllheli – 20 miles away.”

The agency is embedded in the local community, booking domestic and overseas trips for choirs, and football and rugby teams.

Teithiau Menai Travel sponsors Porthmadog FC – where Ann’s son is the manager – and Glanaethwy choir, which came third in Britain’s Got Talent in 2015, is a regular customer.

The agency also worked with Jet2holidays on a promotion during the 2017 Eisteddfod music festival.

The mainstays of the business are bucket-and-spade family holidays, US destinations such as New York and Florida, and UK holidays such as breaks to London.

Cruise bookings have risen significantly over the past five years, and the agency finds that fam trips can boost business.

Ann adds: “I did a trip to Orlando and a river cruise, which helped, as you have better information for clients.”

This year, Sion has visited Egypt and the Dominican Republic, while Ela has been to the Costa del Sol.

The agency also gets a lot of business from teenagers going on their first holidays. “Parents encourage them to book with us, so they can call us if there are any problems,” says Ann.

She appears regularly on Welsh-speaking radio and TV talking about travel stories hitting the headlines, and offering advice about holiday ideas.

In 2017, Ann celebrated her 10-year anniversary with a shop event, featuring special offers and a raffle offering prizes donated by suppliers.

They also organise promotions for events such as Valentine’s Day and run prize draws on Facebook.

“We get new clients all the time, recommended by friends and family, and it’s a busy town centre,” says Ann. “We’ve got a good reputation.

“The best part of my job is talking to customers. I’m like [agony aunt] Marjorie Proops, as people tell me their woes.”

In Welsh, we can only assume. And you don’t need a website for that.

I met Ann and Siân at the Global Rocks event in Cheshire, where they were having a ball – placing bets at the ‘casino’ and dancing to the Dolly Parton tribute act. Ann was also sharing the fun with her followers on Facebook Live. The next morning, I followed their branded car through the mountainous scenery of north Wales, along the Menai Strait to their agency in the centre of Caernarfon.

There was a friendly atmosphere, with a stream of customers popping in – all speaking Welsh, with the occasional word in English such as ‘brochure’ and ‘open-top bus’. As the postman delivered their copy of Travel Weekly, they had a request from a choir for a group trip.

It is a traditional agency, with certificates and awards adorning the walls, family photos on the shelves, offers in the window and plenty of brochures. There’s also a branded aircraft model suspended from the ceiling.

As Ann admits: “I am quite old fashioned. We do book a lot online now, but I do prefer to call, as I like the one-to-one contact with suppliers.”

My favourite trip was…
Alaska and Arizona.

I’ve been in travel…
For more than 30 years.

My dream destination would be…
Vancouver and the Rocky Mountains.

If I were not a travel agent, I’d be…
A gardener: lots of fresh air and exercise, no phones, computers or stress.

The best part of my job is…
Making dreams come true.

I have been in travel…
Since I was 16. It feels like a family here – we’re always laughing and there is no competition about bookings.

My dream destination…
Las Vegas sounds amazing and my husband loves a gamble.

I love it when…
Someone says they enjoyed their holiday more than they expected.

I have been in travel…
Since September 2018.

My dream destination is…
The US.

I love…
Meeting new people – from sixth-formers to pensioners.

My first booking was…
A Jet2holidays family booking to Benidorm.

A day with… Not Just Travel, Bournemouth