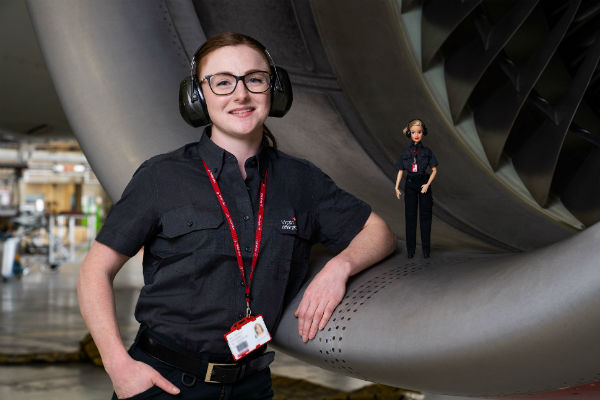 Alongside the dolls, the partnership also includes primary school visitors from female pilots and engineers.

Current statistics from the Women’s Engineering Society indicate that only 12% of the UK engineering workforce is female, and only 4.3% of UK pilots are women.

The dolls were designed in the likeness of Virgin Atlantic uniforms and show different skin tones and body types. The pilot doll has articulated ankles with flat shoes and wears a pilot’s uniform complete with wings and badge. The engineer doll wears flat safety boots, an access lanyard and noise-cancelling headphones. The cabin crew doll pays homage to the red Virgin Atlantic Vivienne Westwood uniform.

Nikki Humphrey, senior vice president for people at Virgin Atlantic, said: “We know that women are currently underrepresented across a number of careers within aviation.  We also know we can’t change this position overnight.  Therefore, it’s imperative we play the long-game, highlighting to primary aged children that any job role is open and our partnership with Barbie marks another milestone in our commitment to this.”

Later in the year, pilot and crew dolls will be sold on-board and through Virgin’s retail partners.

Humphrey added: “Working with Barbie allows us to speak directly to our future generation of aviation professionals, whether they aspire to be cabin crew, engineers or pilots.”