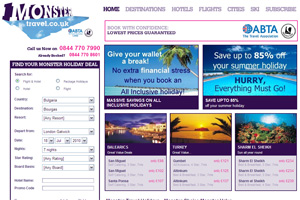 One of Monster Travel’s two directors is the sole director of a new holiday company registered with Companies House just two months before Monster’s failure.

The new Cheap Holidays Company is registered to Julie Gilmore’s Tyne and Wear home address which she shares with David Hawke, her partner and managing director of Monster Travel which went into administration last Thursday.

Gilmore was appointed director of the Cheap Holidays Company on the day of its incorporation on May 24 this year and is also its sole shareholder. Gilmore is also registered as the secretary and marketing director of Monster Holidays.

The Freedom Travel Group has already taken over and pledged to fulfil all future bookings for Monster. A total of 94 staff worked for the home-working and call centre company at the time of its failure, although rival agencies are already recruiting some of the now jobless staff.