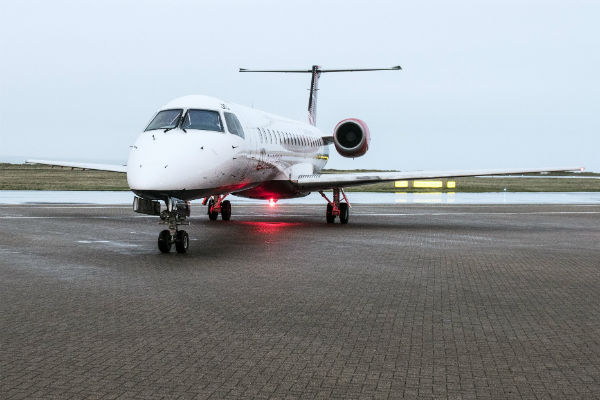 Loganair is stepping in to take over Scottish routes from East Midlands airport being dropped by Flybe this winter.

The Edinburgh and Glasgow services will be operated by the carrier from October 27 as Flybe withdraws flights. The routes are used by more than 150,000 passengers a year.

The move follows Loganair’s inaugural flights from East Midlands earlier this month to Brussels and Inverness and a new link to Aberdeen from February 24, 2020.

Passengers with Flybe bookings will be contacted to set out their options including re-booking onto the new Loganair services.

“As Loganair has no access to Flybe booking data, assistance for customers to arrange re-booking can only be accessed via Flybe’s reservations team,” the Scottish carrier said.

One of the airline’s 49-seat Embraer 145 regional jets will be deployed on the Edinburgh route to provide up to four flights each way on week days – a doubling of the existing frequency – plus Saturday and Sunday departures.

Glasgow will initially be served with two flights each week day plus weekend flights using Embraer jets. The Glasgow service will rise to three flights on week days in the new year.

The upgrade will take place as soon as operational resources permit, according to the airline, which said it was stepping in at short notice to take on the routes.

Fares on both routes start at £49.99 one-way including a free hold baggage allowance.

Loganair will also open up connections from East Midlands to the Highlands and Islands via the two Scottish cities to destinations including Shetland, Orkney, Stornoway, Benbecula, Islay, Barra, Campbeltown, Tiree and Wick.

Managing director Jonathan Hinkles said: “We’re delighted to be announcing our expansion at East Midlands today, less than a month after our first arrival at the Midlands airport.

“As well as safeguarding essential connectivity for business and leisure travellers, we’ll bring improved schedules to the Edinburgh route straight away and to the Glasgow route just as soon as we can.

“We’re confident that the jet service, enhanced timetable and Loganair’s friendly service will all be warmly welcomed by regular travellers on the routes – whom we look forward to welcoming to the fast-growing Clan Loganair frequent flyer programme too.”