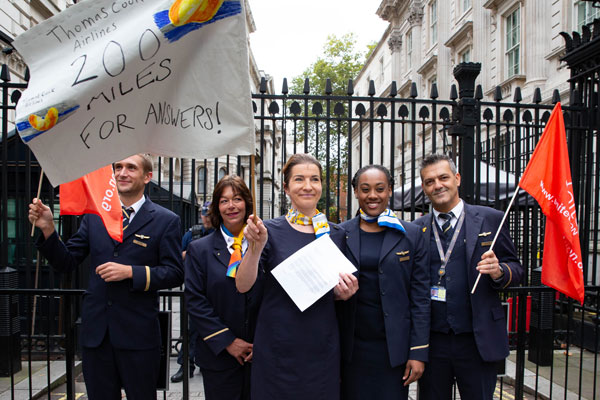 Ex-Thomas Cook cabin manager Rachel Murrell has walked 200 miles from Devon to Westminster to highlight the plight of the 9,000 workers who lost their jobs after the company’s collapse

She made it to the gates of Downing Street on Friday afternoon with a letter to prime minister Boris Johnson demanding a thorough probe into to failure.

Murrell, who had worked for Thomas Cook for 20 years, is critical of the lack of communication she and her colleagues received from those winding up the company, and calls for “an in depth, forensic investigation into the company’s demise”.

She said: “It seems odd that the business was able to pay the directors huge bonuses, and even more strange that our sister airline Condor, bailed out by the German government on the 25 September, is now advertising for crew to work on the old Thomas Cook routes.”

Her trek comes to an end just days after hundreds of former Thomas Cook cabin crew and travel agency staff lobbied Parliament to demand that workers are paid the wages they are owed and that the directors repay their huge bonuses.

Unite, the union representing the majority of the affected cabin crew, has accused the government of allowing the profitable Thomas Cook airline to collapse into compulsory liquidation, while group subsidiaries in Germany, Spain and Scandinavia, were able to continue to fly after receiving support from their respective governments.

Unite national officer Oliver Richardson said: “Unite is immensely proud of Rachel and all of our Thomas Cook members who have shown such dignity and determination in the face of their shoddy treatment.

“Thomas Cook workers have every right to be angry. The sudden collapse has left many workers desperate and with no income.

“Unite is determined to get these workers the wages they’re owed, and has called on the business secretary Andrea Leadsom to restore a modicum of justice to this scandal and ensure workers are paid.

“We are also urging banks, mortgage lenders and landlords to give these workers the breathing space they need to get back on their feet.

“Unite stands shoulder to shoulder with the workers’ calls for the directors to hand back their bonuses and will put pressure on this government to bring in legislation to ensure that a company collapse of this kind is never again allowed to happen.”