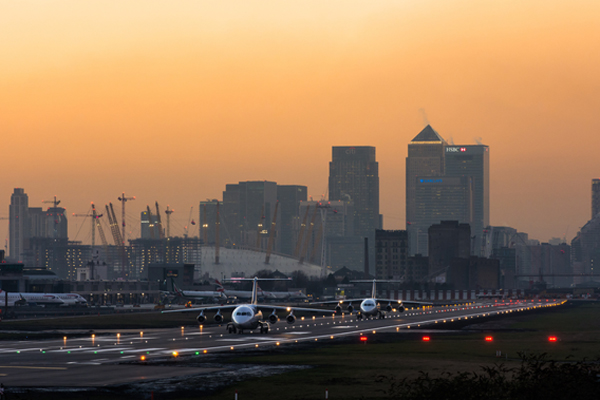 Climate change activists are threatening to stage a three-day protest at London City airport as part of a plan to “shut down” parts of London.

Large-scale demonstrations are planned at another 11 sites around capital.

Activists plan to take action at government departments around Westminster, blockade Smithfield market, and then move on to City airport in London Docklands later in the week.

On its website, XR said: “Starting on Monday 7th October and continuing for as long as it takes, Extinction Rebellion and allied movements will peacefully shut down Westminster in central London and build pressure with satellite actions until the UK Government takes meaningful and decisive action on the climate and ecological emergency.

“After two weeks around Westminster, we will move offsite and pressure building actions will continue weekly.

“We will take non-violent mass actions around government and major infrastructure; if this leads to mass arrests then this will only add to the pressure, maximise disruption, and split resources of the authorities.

“We want flexibility to move, disrupt, and build pressure on the state rather than tie ourselves to sites.”

A London City airport spokesperson said: “We are aware of Extinction Rebellion’s threat of protest at London City airport and are working with the Metropolitan Police to ensure the safety and security of our passengers, as well as minimising any disruption to their journeys.

“We urge protesters to think twice about preventing hardworking people from travelling, be that families going on holiday from their local airport, tourists visiting London, or small businesses that rely on convenient connections.

“The climate change challenge is a matter for everyone, and we are committed to playing our part in achieving realistic plans to rapidly decarbonise.

“London City airport has already reduced emissions by 30% over five years and we are committed to net zero carbon emissions by 2050, as well as working with partners on initiatives that will significantly reduce overall emissions related to aviation.”