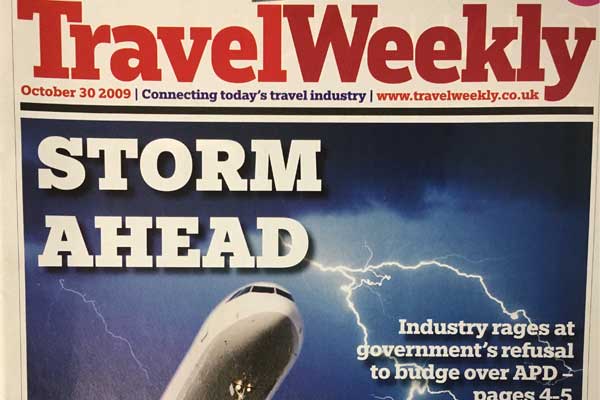 • Industry leaders threatened an increasingly vocal campaign against Air Passenger Duty amid rising anger at the government. BA chief executive Willie Walsh warned APD rises in November could cost the economy “billions”, while tourist boards also slammed the move and Abta chief executive Mark Tanzer urged the trade to continue its fight against the tax. Broadcaster Floella Benjamin backed a campaign by MP Sarah Teather to urge the government to rethink the level of APD.

• The Civil Aviation Authority was accused of taking “manifestly disproportionate” action against Travel Republic and its managing director Kane Pirie at the summing up of a case at Stratford Magistrates’ Court. The online travel agent was accused of breaching Atol regulations in a case it subsequently went on to win.

• Meanwhile, Flo Powell, the new director of the Association of Cruise Experts [the former name of Clia UK & Ireland], said the association was drawing up plans to train more agents to attain Ace Ambassador status. 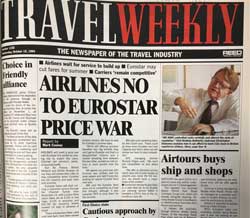 • Airlines said they would avert a winter price war with Eurostar – set to launch in November – by not matching the cross‑Channel rail service’s tariffs.

• BA suspended its loss-making Concorde service between Heathrow and Washington DC after 18 years.

• Abta said it might water down its new rule aimed at expelling insolvent agents, after being asked to consider a compromise.

• Columnist Noel Josephides argued that as the multiples struggled in the wake of the discount war, there had never been a better time for independents to make a stand. “All it takes is guts and confidence,” he said. 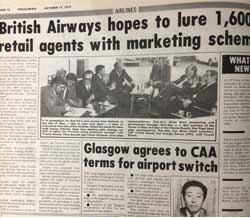 • As talks moved closer between Abta, agents and operators on a joint negotiating position on government plans for a reserve fund following Court Line’s failure, Cosmos managing director Wilf Jones attacked the plans, saying it was “wrong to collect a premium from future clients to cover a past loss”.

• Agents reacted angrily to Warner Holidays’ plan to cut agency commission from 7.5% to zero in 1975.

• Air France said it was considering reviving Birmingham-Paris flights after a 20-year gap, while BA hoped to sign up 1,600 agencies to its new marketing scheme, which cost £3.85 a year.

• Meanwhile, Travelnews reported that iced vodka awaited 130 Thomson holidaymakers for the firm’s first inclusive tour to the then USSR, from South Wales.