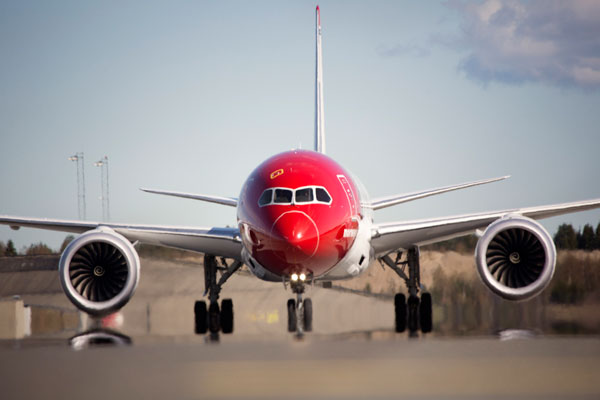 Norwegian Air is to bolster its finances by agreeing to a deal with a Chinese finance firm to take on 27 aircraft the carrier has on order.

The arrangement is expected to cut Norwegian’s committed capital expenditure by about $1.5 billion based on an initial 27 aircraft.

The deal was revealed as the airline reported a 38% rise in summer quarter profits to 2.2 billion Norwegian krone [NOK] with revenue up 8%, mainly driven by long-haul growth.

While overall passenger carryings fell by 3% year-on-year to 10.5 million, the airline cut costs by NOK 2.3 billion in the three months.

The US is now Norwegian’s largest market in terms of revenue, followed by Norway, Spain and the UK.

Acting CEO Geir Kalsen said: “Norwegian’s third quarter results show that we are delivering on our strategy of moving from growth to profitability.

“We are delivering record-high earnings, record-high operating revenue and reduced unit cost, even when hit by operational issues outside of our control.”

The purpose of the Chinese collaboration will be to finance, own and lease aircraft that Norwegian has on order.

The joint venture initially comprises 27 Airbus A320neo aircraft to be delivered from 2020 to 2023. The Chinese firm will also provide aircraft financing for aircraft within the joint venture.

The Chinese leasing arm will be the majority owner of the joint venture with a 70% share.

Karlsen said: “Following several months of negotiations, I’m very pleased to announce that we have reached an agreement with CCBLI to establish a joint venture for an initial 27 Airbus A320neo aircraft.

“This agreement will contribute significantly to reducing our current and future capital expenditure.

“The JV is one of many important initiatives that need to be realised to deliver on our strategy of moving from growth to profitability.

“I am convinced that CCBLI with its professionalism, financial strength and capabilities will be an excellent partner for Norwegian going forward.

“This JV is an important first step in building a strong strategic partnership between our two companies.”

CCBLI head of aviation Kevin MI said: “We have during the past year developed a good relationship to Norwegian, including two already executed transactions and we are very much looking forward to continue to build on this relationship through this JV.”