• Lucy Huxley was announced as group editor of the TWgroup, to start early in 2010. Group chairman Clive Jacobs said Huxley’s “commitment, drive and professionalism had taken her to the top of her profession”. He said the magazine could “do more to help agents”.

• Somewhere2stay said it would remain within Abta despite the decision by rival Thomas Cook-owned bed banks Hotels4U.com and Med Hotels to quit. It followed Abta’s resolution to force bed banks to assume liability for bookings if an Abta agent failed.

• Disney Cruise Line began promotions in the UK for the first time to increase sales ahead of the arrival of big ship Disney Dream.

• Meanwhile, Britain’s oldest travel agent, Joe Langdell, turned 90 this week – but still had no plans to retire. “I am still slogging away and losing money,” joked Langdell, who worked for Lancing Travel in Sussex where his granddaughter Cheryl worked full-time. 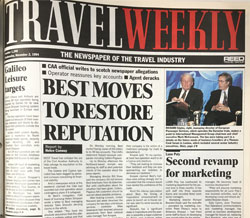 • Eurostar was given the go-ahead to operate trains at the weekends when the service started on November 14.

• In aviation news, Air New Zealand announced a £19m revamp of its entire range; Canadian Airlines considered its first codeshare partners in the UK; and Heathrow was set to open its new flight connection centre linking transfer passengers at Terminals One and Two. 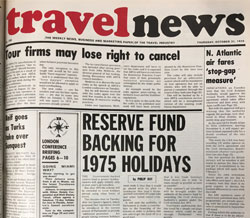 • Last-minute cancellations of holidays by operators after the date when balance payments were due were set to become a thing of the past in Abta’s new code of conduct, except in cases of force majeure. Meanwhile, a government-backed reserve fund was announced in the Queen’s Speech, to protect holidaymakers from 1975.

• British Airways named Gordon Davidson as its director for supersonic transport. Otherwise known as ‘Mr Concorde’, he was tasked with preparing for the airline’s introduction of Concorde in 1976.

• London firm VIP Travel was reported to be planning to “open up” Cuba, which had been closed to tourists since Fidel Castro took power in 1959. It signed an agreement allowing 500 UK tourists a year to visit the island.