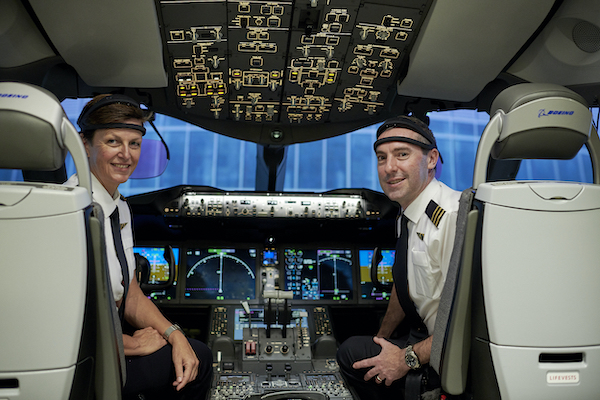 Australian national carrier Qantas is operating a non-stop flight from London to Sydney today (Thursday) as part of its research into ultra-long-haul travel.

It will be the second of three Project Sunrise flights which will help the airline to study the effects of jetlag and to design optimum rest and work patterns for crew.

The flight follows the first such experiment, which saw a Qantas aircraft fly from New York to Sydney last month, with 49 passengers and crew.

It cut about three hours from the typical gate-to-gate travel time of current one-stop flights.

Qantas has re-purposed the delivery flights of three new Boeing 787 Dreamliners, which would otherwise fly empty from Seattle to Australia.

The journey from London will feature ‘supper at breakfast time’ among the onboard changes to help passengers adjust to their new time zone.

It will carry about 50 passengers and crew on the flight, which is expected to take about 19 and a half hours. The service usually takes 22 hours, 35 minutes via Singapore.

All carbon emissions from the research flights will be offset.

Qantas chief executive Alan Joyce said: “We know that travellers want room to move on these direct services, and the exercises we encouraged on the first research flight seemed to work really well.

“We’re definitely looking to incorporate on-board stretching zones and even some simple modifications like overhead handles to encourage low-impact exercises.”

The findings from the three flights will be incorporated into service and product design for long-haul flights, especially the direct services that Qantas hopes to operate commercially between the east coast of Australia and London and New York.

Today’s flight marks the second time in history that a commercial airline has flown directly from London to Sydney.

That aircraft is now on display at an aviation museum near Sydney.