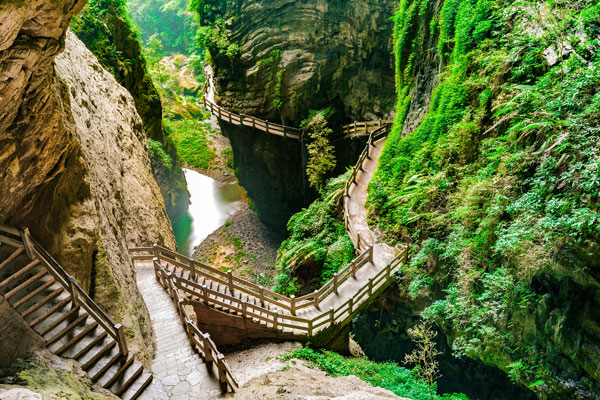 Spice up a China booking with a trip to experience Chongqing’s natural beauty, writes Ellie Fazan.

“Chongqing is a less-travelled, less-known part of China,” says our host, Wendy Wu, as she waves us off in person. “It gives a new perspective, perfect for those wanting to explore beyond the main tourist sites.

“Many wonders are waiting for you, from two Unesco-listed World Heritage Sites to millions of lights twinkling in Chongqing at night.”

Situated where the Yangtze and Jialing rivers meet in southwestern China, this teeming mega‑city is home to about 30 million people. The cooler climate in spring and autumn make these good times to visit; during summer, temperatures reach the high 40s.

Following recent government investment in a smart new terminal at Chongqing airport and the introduction of an e-visa scheme to encourage more foreign tourists to the destination, we joined a fam trip with Wendy Wu Tours to see what the area has to offer. 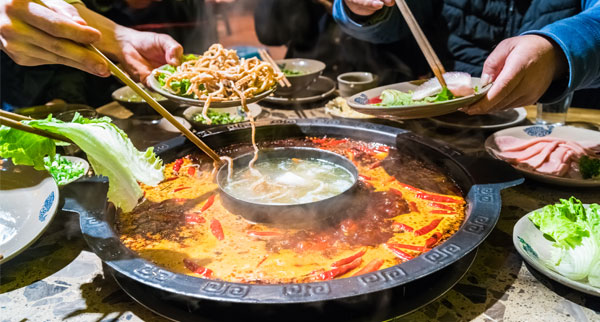 This is the spiritual home of hotpot (huo guo in Mandarin) and there are more than 50,000 restaurants serving up this local speciality here. Eating outside under the awnings at Lao Guo Pa Zi, our group of 14 agents were the only Western faces among a throng of locals eating and laughing for hours around bubbling cauldrons.

The most popular is yin and yang: one part tasty bone broth, the other flaming-hot chilli oil flavoured with cardamom, fennel, star anise and Sichuan peppercorns that fizz on the tongue. Ours was served with Chinese pork sausage, fresh prawns, thin slivers of beef, exotic-looking mushrooms, piles of bean sprouts and vivid-purple sweet potato, all of which you cook yourself by dipping it into the steaming broth.

The locals were a little more adventurous: frogs’ heads snipped to order in the open kitchen, eels and duck-blood pâté. Don’t let that put you off. Washed down with cold bottles of Chinese beer, it’s both a delicious meal and riotous local experience.

The docks are a reminder that Chongqing’s fortunes are forever linked to the Yangtze River, and our launch point to explore the wilderness of this part of southwestern China. Given five days, customers could cruise to Wuhan, taking in the spectacular canyons and cliffs of the Three Gorges. But even over the course of an evening, we watched the city blink and flash into life in a skyscraper-filled, neon-hued vision of the future.

We snatched glimpses of the past too at Ciqikou Ancient Town, where traders gleefully heckle one another across the street, puppet shows and operas spill from tea houses, and street hawkers sell anything from grilled octopus on sticks to hot, fragrant nuts. Get lost in the winding side streets and peek into real homes and tiny cafes, or watch porters carrying untenably heavy shopping on the end of long bamboo poles.

After a day exploring the bustling city, the best place to rest your weary bodies is one of the city’s many hot springs. At the Ronghui Hot Springs Resort, the 48 options include medicinal hot springs, aromatherapy and herbal medicine pools, as well as a wave pool, infinity pool and foot spa filled with tiny fish that nibble the dry skin off your feet. Spending time splashing between the very hottest and vert coldest pools was positively invigorating, and left my body tingling. 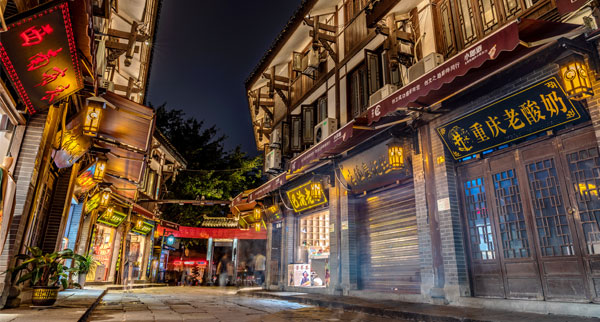 Outside the city, the undulating hillsides and mountains are spectacular, as are its cultural treasures. The next morning, we headed to the Unesco-listed Dazu Rock Carvings, where more than 60,000 stone figures dating from the 9th to the 13th centuries are carved into the steep hillside. Depicting vivid scenes from heaven and hell, they are influenced by Buddhist, Confucian and Taoist beliefs. Many such sites were destroyed during the Cultural Revolution, but these – obscured by lush forest – remained unscathed and glimmer among the foliage like hidden treasures.

At Black Mountain Valley, we meandered along a series of planked waterways and floating bridges through the depths of the cool valley. Surrounded by crashing waterfalls and towering forest, we were told that extraordinarily high levels of negative oxygen ions in the air make it good for mind, body and soul. Still, we were in a sticky state by the time we finished the 10-mile walk, and a cable car yanked us back to reality.

In China, ancient wonders coexist with fantastical futuristic development, and the next day we descended 80m into the gorge of the Three Natural Bridges – another Unesco-listed landmark, where the karst landscape has been evolving for 2.5 billion years – in a glass elevator.

Daredevils can venture on to the Sky Walk, a glass bridge 280m above it. But for me, descending ever deeper into the gorge on foot through a series of caves, tunnels and bridges – where the average height and span was 200m – over huge open meadows was the only way to go, even if it was a little more arduous than the option taken by the many Chinese tourists we saw being carried down on sedan chairs while filming on WeChat.

On nearby Fairy Mountain, we spotted three young women, ghost-like and beautiful, walking in the thick fog dressed in ancient Chinese costume. Daisy told us this style of dress has recently been adopted by some young people as a reaction to the styles and thinking of present-day China. It was a surreal and beautiful moment that spoke volumes about the culture here today. 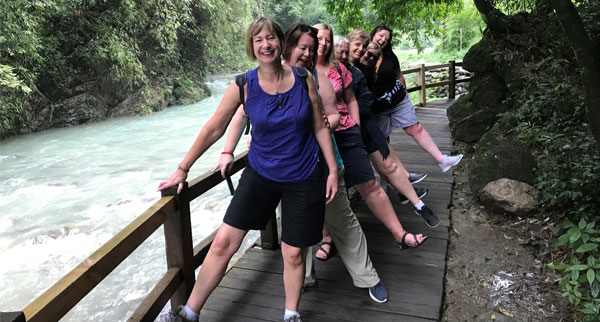 Wushan is a pretty city with an Alpine feel, where Chongqing city dwellers come to escape the summer heat. Restaurants line the streets – and the food is famously good. At Chen Jia Hua Yuan – meaning ‘family garden house’ – we ate cumin-spiced lamb with crispy, chilli potatoes (the altitude means they are a normal part of people’s diet here), smoked tofu with oyster mushrooms, and heaps of flavourful vegetables all grown on the owner’s farm.

The story of the region – including its relationship to the river, its fiery food, farming heritage and the traditions of its Tujia minority people – is told in a dramatic and spectacular opera, Impression Wulong. Directed by Zhang Yimou, the creative director of the opening ceremony at the Beijing Olympic Games, it is set in a natural amphitheatre surrounded by mountains and dark forests. Incredible lights, movement and sound rippled and echoed around us, bringing the gorge to life – and making the hairs on my arms stand on end. To say it was the most incredible live performance I’ve ever seen is no exaggeration, underscoring all that’s so captivating about this part of China.

“My favourite part of the trip was getting out into the countryside, visiting Wulong Karst National Park and witnessing the beauty of the Three Natural Bridges. It can be difficult travelling alone in this part of China, so going with a group was ideal. I’d recommend this region of China to clients who enjoy the outdoors and want to go a little off the beaten track. I like to try a bit of everything and had Chongqing’s signature noodle dish flavoured with chilli oil, spring onion and coriander – xiaomian – for breakfast!”

The leafy Panda House is one of the highlights of Chongqing Zoo. “I could have watched them for hours chomping on their bamboo lunch,” says Newell’s Travelagent Steph Borys from Truro. “And watching the ‘teenagers’ tumble and play was adorable.” Local people are given free passes to the zoo, which is set in 45 hectares of wooded parkland, and gather to dance or practise tai chi in the cool shadows.

Wendy Wu Tours’ Chongqing & Yangtze Cruise is an 11-day private tour – with your own guide – that visits Chengdu and its giant pandas, the Dazu Rock Carvings, Chongqing, the Black Valley and the Three Natural Bridges, before embarking on a Yangtze river cruise through the Three Gorges, finishing in Shanghai. Prices start at £3,490, including flights with Tianjin Airlines, which operates a weekly direct service from Heathrow to Chongqing.
wendywutours.co.uk