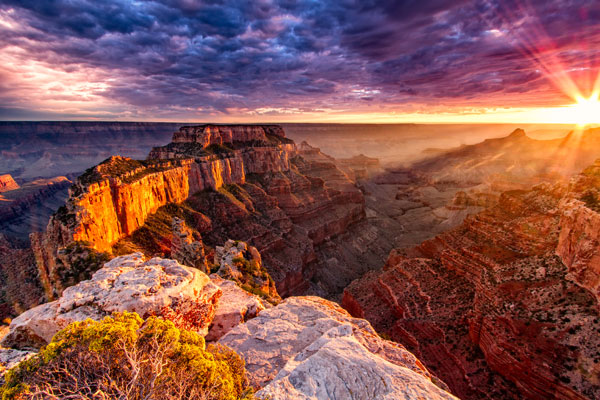 Ben Ireland sets off on an American adventure through California, Nevada and Arizona.

“How deep is the Grand Canyon? Did you say 1,857 metres? And you’re asking me to put a blindfold on then walk up to the rim?”

It sounds like a crazy idea, but as we approach the edge of the world’s most famous hole in the ground without being able to see where we’re going – with gusts of wind picking up around us – we realise the uniqueness of this experience.

This route through the southwest US is well-trodden, but with experiential travel topping the list of what customers want these days, you’d do well to make it a bit different. 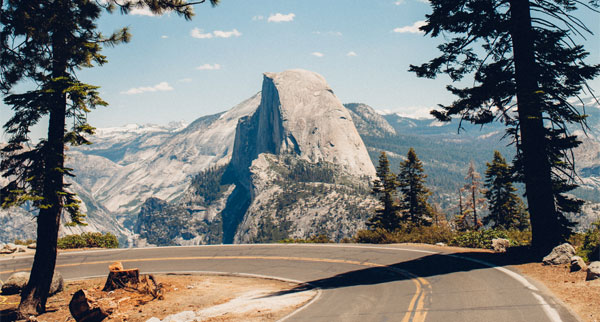 TrekAmerica’s Western Wonder escorted tour covers roughly 1,500 miles in seven days. Sounds like a slog, but it’s incredible how much you can see when you’ve got a specialist guide leading the way.

The itinerary takes you from Los Angeles to the Colorado River, the Grand Canyon, Las Vegas, Yosemite National Park and San Francisco and is perfect for students or young professionals – an option for those who want to see a lot on a limited amount of annual leave and for a reasonable price.

Our 12-strong group was made up primarily of people in their late 20s and early 30s, and mostly solo travellers. Five were from the UK, with others from Australia, France, Germany and India.

We hit it off from day one – with fellow campers bonding over hobbies and interests, music, and some even through a shared love of service station fried chicken. The group dynamic can play a huge role in the success of a small group tour. Long drives help – and the scenery along the way is stunning.

You might think heading into the Arizona deserts would offer little by way of sightseeing, but you’ll gaze on all manner of wonderful rock formations, giant cacti that could’ve come straight from the set of a Western film, and the Joshua Trees of the Mojave Desert. You might even spot a ‘dust devil’ – a mini sand tornado, which is commonplace in the region.

Reaching the Colorado River on day one of the Trek America tour, at around sunset, is a great first stop as it’s an easy camp where you can learn how to put the tents together, have a dip in the (chilly) water, relax with a few drinks and chat around a campfire.

Next up, one of the seven natural wonders of the world. The Grand Canyon needs no introduction, but the thing that’s hard to convey when telling people about the place is its sheer size. That may sound strange as it’s known for its scale, but you don’t realise quite how gigantic it is until you see layer upon layer of rock, deposited over centuries, if not millennia. And having been blindfolded for our walk from the car park to the edge, the first sight of it was even more jaw-dropping.

You could spend days at the Grand Canyon and not lose interest, but a walk around the rim and a trek down into the edge of the crater give two different perspectives. A moderate trek down the Kaibab Trail to the appropriately named Ooh Aah Point was 1.8 miles – which sounds short, until you factor in the gradient. At the end, our guide’s second surprise was bringing pizza to our lookout spot for sunset. Other groups and self-guiders were mighty jealous. 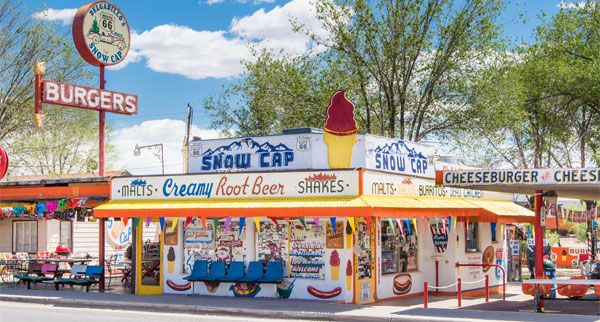 After a less strenuous 5.4-mile Rim Trail walk the next morning, we were on the road again.

From the world’s most famous canyon you join one of its most famous roads, Route 66. Certain towns are a real throwback to 1950s automobile-mad America, with Delgadillo’s Snow Cap drive-in in the town of Seligman a great example. It does nice hamburgers and is known for its all-American milkshakes and silly jokes with customers.

Old Route 66 eventually takes you to Las Vegas, via the Hoover Dam. The bright lights of The Strip are a sight in themselves, and on entry we were given a run-down on the history of each of the best-known hotels and casinos. Of course, most groups of 20 to 30-year-olds will want to experience what Vegas is best known for – a great night out.

TrekAmerica’s tour includes a party bus that takes the group to famous sights such as the Bellagio fountains and Welcome to Fabulous Las Vegas sign, allowing the group to let their hair down with a few (or more than a few) drinks. After that, everyone is free to roam for the rest of the night and the following day, which means everyone in the group – who will all have different priorities – can do what they want, be it gambling in the casinos, a zipline over Fremont Street, activities such as shooting or axe-throwing, or shopping. 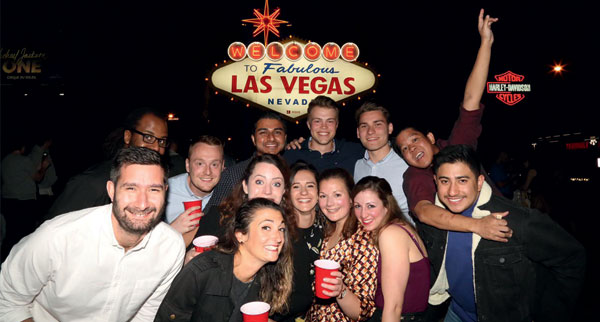 The second night may not be quite as raucous with an early start and 10-hour drive to follow as the tour makes its way back to California and Yosemite National Park. The last hour or so of that drive is another example of breathtaking scenery, but with jagged rocks poking out of lush green hills rather than the desert, showing the range of landscapes across the southwest US.

Camping is just outside the national park boundaries, so it was just a short drive the following morning for a full day exploring Yosemite. There are walks of varying degrees of difficulty, and must-sees such as the Tunnel View and Bridalveil Falls. The most dramatic is Yosemite Falls, the tallest waterfall in North America at 739 metres, including the upper and lower sections. It’s a sight to behold and easy to view after a short walk from the visitor centre. 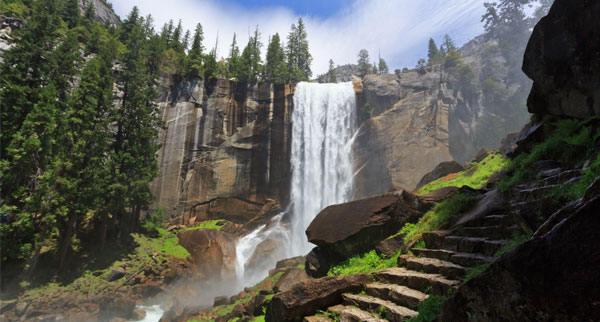 For active types, there are plenty more strenuous hikes. We tackled the moderate three-mile Mist Walk to Vernal Falls, which takes walkers through a scattering of snow and back to sunny rock faces with views of Nevada Falls. There are troublesome spots, but by this point the group was close enough to lend each other a hand in tricky spots.

A full day is needed in Yosemite and having a guide to help you decide what to prioritise means you’ll plan it well and make the most of the day.

After the final night of camping it was on to San Francisco – another long drive, but worth the mileage as the tour ends at the iconic Golden Gate Bridge. Another landmark that needs no introduction, it’s the perfect spot to say farewell after a walk across the near-two-mile bridge that connects different sides of the Bay Area. Some of the group were set to continue on in San Francisco while others headed home, but one thing we all shared was the series of unique experiences that had brought us here.

Four nights of TrekAmerica’s Western Wonder trip are spent camping. Tents are easy to put up and away using the ‘tent burrito’ method, even for those with little camping experience. Camping keeps costs down, but also helps groups create crucial camaraderie. It’s easy to get to know each other around a campfire with a few beers, making dinner together and melting s’mores. While it’s not glamping, campsites are organised, with clean facilities and hot water. Good advice for customers is that overnight temperatures in the shoulder seasons can be as low as zero, while in summer, can rise to 25C. As fun as camping is in the wilderness, a two-night hotel stay in Vegas breaks it up nicely, whether to wash your hair, sleep in a springy bed, check social media on strong Wi-Fi or reorganise a bag. The four-star Golden Nugget hotel was a slice of classic Vegas, set on Fremont Street in the city’s lively downtown area. 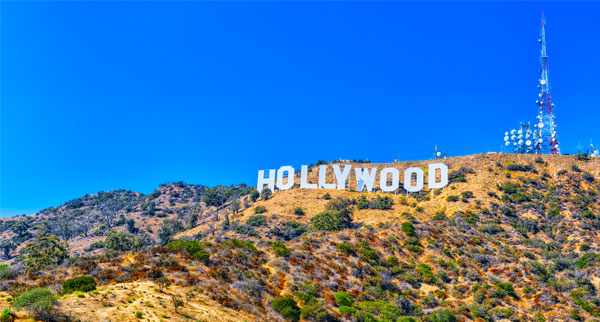 • Los Angeles: Its most iconic spot is the Hollywood sign. You can see it from as far away as Hollywood Boulevard, but the best way is to get up close, and as an add-on to itineraries starting and finishing in LA, TrekAmerica offers the Los Angeles: Hollywood Sign Small Group Tour in Luxury Van. From £25, the one-hour tour departs from the famous TCL Chinese Theater on the Hollywood Walk of Fame and takes you behind the white letters that overlook the city.

• San Francisco: No trip is complete without a visit to Alcatraz Island. Most famously a prison, the island was also an American Civil War fort, and is well-known as the site of a civil rights movement during its occupation by Native Americans after the prison was closed. Do Something Different offers the Alcatraz island tour and a hop-on hopoff Big Bus ticket for £90.

TrekAmerica’s Western Wonder from Los Angeles to San Francisco or vice versa starts at £849, excluding international flights, with departures from April to October. Extra nights can be added in Los Angeles and San Francisco, as can tours and excursions within each city. Each client must set aside an additional $70 in cash for a food kitty and insurance is obligatory.
trekamerica.co.uk