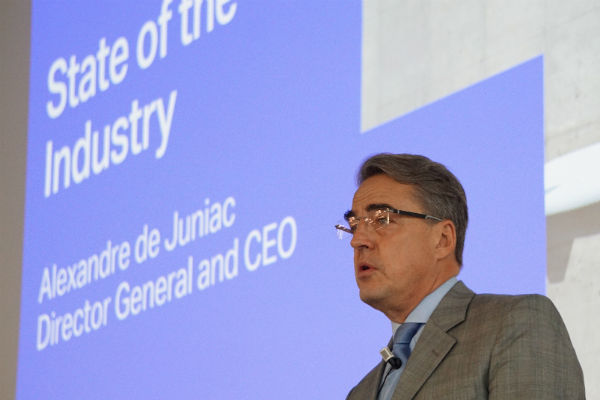 Governments in Europe stand accused of “focusing on collecting taxes rather than reducing emissions”.

The claim from global airlines’ trade body Iata came as it warned that latest proposals in Germany would approximately double the taxation on passengers.

This would make it harder for people on lower incomes to fly, Iata argued.

The association claimed that the “climate challenge” can only be overcome by the aviation industry and governments working together.

Governments have the power to accelerate carbon reductions by encouraging investment in sustainable fuels, new technologies, and improvements to air traffic control, according to Iata.

Director general and CEO Alexandre de Juniac called on governments in Europe to seize the opportunity to create a sustainable aviation industry that protects the environment and increases connectivity opportunities.

Speaking at the opening of a gathering of aviation stakeholders in Berlin, he said: “Taxation is a crude and inefficient method for covering environmental costs. And it picks a fight with the wrong enemy.

“The goal must not be to make flying unaffordable. Neither should it be to cripple industry and tourism which creates jobs and drives development. Flying is not the enemy – it is carbon.

“This shows that, despite the European aviation strategy, we still have a lot of work to do to ensure that governments work with the industry in partnership for the greater goal – an efficient and sustainably connected Europe,” he said.

Airlines have cut average emissions per passenger journey in half compared to 1990 with, the industry committed to reducing its environmental impact further.

The sector aims to cut total emissions to half the 2005 level by 2050, in line with the goals of the Paris climate agreement.

Growth in CO2 emissions from 2020 will be offset using the Carbon Offsetting and Reduction Scheme for International Aviation (CORSIA).

Meanwhile, more than 30 airlines agreed to increase female employment at senior and under-represented levels within the industry under a ‘25by2025’ pledge.

They will undertake to increase female representation in these areas to a minimum of 25% or by 25% from current levels, by 2025.

“We welcome the airlines that have committed to the 25by2025 campaign today, said de Juniac.

“This has created huge momentum for this very important issue. We need a skilled, diverse and gender balanced workforce to meet the growing needs of our customers.

“Our eventual goal is equal gender participation at all levels, and the 25by2025 pledge is the start of our journey on that path.”