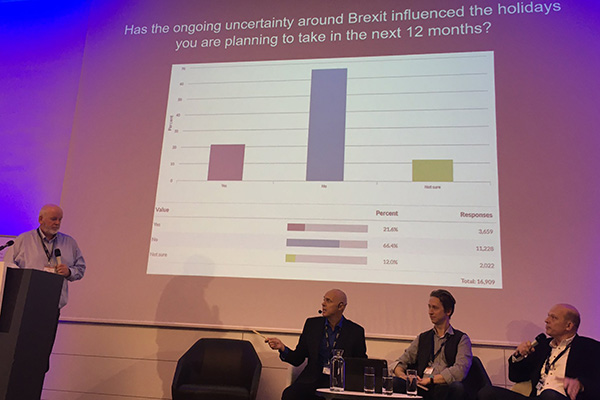 Brexit uncertainty and the failure of Thomas Cook are not putting customers off booking holidays, according to The Specialist Travel Association (Aito).

Aito revealed the results of its annual online Insights survey of 26,400 responses from members’ customers at its overseas conference.In the survey, 79% said Brexit had not influenced their holiday plans so far this year.

Of the 16% that said it had changed their plans, 70% said they had travelled less to Europe this year.

Similarly, 66% said Brexit had not influenced the holidays they  planned to take in the next 12 months, while 22% said political uncertainty was impacting their choices and 12% were not sure.

More from Aito: Brexit will be like ‘slow puncture’ for economy – Sir Vince Cable

Industry must engage with government or face quotas

Of those that said Brexit was influencing their decisions for the next year, 73% said they were now less likely to travel to Europe and 52% were more likely to take a UK break.

There was no noticeable difference between clients asked pre and post Thomas Cook’s failure whether they were more or less likely to book a package tour operator (34%) , specialist operator (52%) or independently (13%).

In further good news for Aito companies, 22% of customers plan to travel more in the next three years, 67% the same amount and 11% less – a net increase of 11%.

Email was the preferred way for companies to keep in touch with clients and when asked the prefered social media channel, WhatsAp was the most popular choice of Aito clients (51%) followed by Facebook (48%) while 30% said they did not use social media.