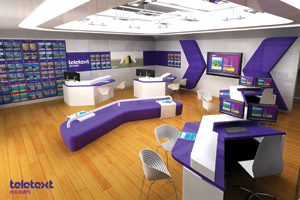 Teletext Holidays has confirmed it will open 10 new shops in Tesco stores next year, but today announced the closure of its call centre in Barnet.

The company will instead handle phone sales through a deal with Broadway Travel which is based in Luton and operates two call centres, one of them in Newcastle. Broadway Travel will also run the outlets in Tesco under the Teletext Holidays brand.

The shops will open following a successful year-long trial at two Tesco stores in Chesterfield, Derbyshire and Pitsea, Essex. All 12 outlets will be staffed by Broadway Travel employees – making them the first shops managed by the company. They will open seven days a week between 8am and 10pm.

Forty staff at Teletext Holidays’ Barnet call centre learned of the site’s closure and their potential transfer this morning. Those who choose to move will do so under the Transfer of Undertakings (Protection of Employment) or TUPE regulations which guarantee the retention of existing salaries and conditions under a new employer.

No notices of potential redundancy have been issued, although it is likely some staff will chose not to move following a consultation period.

The news comes a week after the multimillion pound re-launch of Teletext Holidays as a wholly-digital aggregator of holiday and flight offers. Its retail division forms a minority part of the business.

Managing director Victoria Sanders declined to give further details of the deal with Broadway, but described it as “a long-term partnership”.

Sanders said: “This has been a very difficult decision, but the partnership with Broadway Travel makes commercial sense.

“Our focus needs to be on delivering market-leading digital platforms for our advertisers. We want to let Broadway Travel use its expertise to deliver our retail business, which includes supporting us with the expansion of our shops in Tesco.”