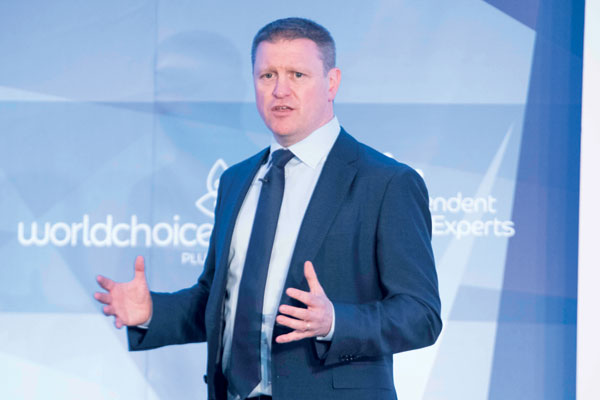 The Travel Network Group’s chief executive, Gary Lewis, tells Lucy Huxley about its tech-driven plans after changes at board level.

In 2016, Gary Lewis led a management buyout of The Travel Network Group with four fellow directors and shareholders.

Two left, in 2017 and 2019, while a third, chief operating officer Lisa Henning, this month announced her plans to depart, which will leave just Lewis and finance director Vim Vithaldas from the original line-up.

Lewis has brought in Julie Pinkney as retail director to absorb some of Henning’s duties and promoted Stephanie Slark to membership services director. Both will join Lewis and Vithaldas on the board, alongside operations and risk director Emily Sutton and communications director Alexis Coles-Barrasso.

“A couple more announcements” were due in the coming weeks, Lewis added. “The team we had in place for the MBO were absolutely fit for purpose for that part of the journey and I thank them for the part they played. But we are fit now for a very different story for the next two to three years. What we have coming down the road in terms of technology, scale and automation has different requirements.

“We made some personnel announcements in January, but we have been planning these next steps for some time. We knew Julie was coming in to take a core part of Lisa’s role at a director level, and Steph has been working in membership for more than six years, so it was natural for her to step up.”

Henning is in a “transitional phase doing her final handovers” and will go on gardening leave in July, Lewis said.

Investment in new technology is the key pillar in the group’s strategy.

“People follow strategy and our strategy is to keep helping our members grow their businesses,” said Lewis. “Without a doubt, what doesn’t go away is our emotional connection and relationships with members.

“This goes back to our conference in Monaco in 2017, where Sir Clive Woodward told us ‘Those who win at tech, win’”, said Lewis. “We tried to get [technology] off the shelf in the past but we were struggling to get it in the right format and scale.

“So we brought in a consultant and have taken an off-the-shelf proposition from a travel tech specialist that tailored it to our requirements. It will help members search and book, with back-office finance functions, and with reporting and data collection to help with marketing. And it’s all bespoke.”

The kit, currently known internally as ‘the new retail platform’, was installed in the group’s eight owned shops on December 14 “to allow us to test how it works before we roll it out”, explained Lewis.

Throughout January, February and March, it is being extended to the consortium’s 30 managed services members. “This is setting us up to roll it out to the pipeline of 1,030 other members’ shops,” he said, adding that 80 were “ready to go”.

Members have to pay extra for the new retail platform, but Lewis said: “It’s at a price that allows them to get big technology at a manageable cost for even a small member without going through a tech company.

“Lots of our members are working from really old, legacy systems and know they should be moving on, but haven’t got the time, money or skill. Now we have a solution.”

He said reaction so far had been hugely positive. “There have been a few bugs, but it’s proving to be fantastic – it’s giving better control of data and reducing the amount of time spent on back-office functions – all with the aim of making members more efficient and profitable. We will take all the learnings from each roll-out to make sure it’s smoother each time we give it to members in the future.”

The platform will have a bespoke arm for tour operator and Travel Trust Association members from March/April; Lewis added that the 480 TTA members have specific processes, payments and insurance requirements. About 15% of TTA members operate as tour operators.

“We are so excited,” he added. “It changes the conversations our membership team are having with our members, and that they can have with their customers, and should drive fantastic results.”

Lewis said bringing a retail director into the business was a significant move. Part of Pinkney’s remit will be to take the group’s eight owned shops “to another level”.

“When we bought Worldchoice in 2008, we owned 28 shops. We closed all but one of them because they weren’t profitable,” Lewis said.

The group has since taken on seven more as part of its programme “to help members on their journey”.

Lewis said this could involve helping members to move into homeworking; transition into retirement and pass businesses on to management teams; move into the group’s managed services division; or, in some cases, sell to Lewis and his team.

“Having Julie will give us a better way to manage those conversations and help members on the next stage of their journey,” Lewis said.

The group acquired Stourbridge-based Destina Travel this month but Lewis said there were no more imminent acquisitions.

“We have grown organically and very slowly,” he said. “Having our own shops benefits the group as we can use them as testbeds for new initiatives. But be under no illusion, our prime focus is our members.”

That said, he wants the owned shops to set an example. “Our job is to help members run their business better. If we can’t run our own shops well, we shouldn’t be telling members what to do,” he said.

Pinkney will also be responsible for running dynamic packaging tool ‘Dynamic’. She brings experience from bed banks and ancillaries such as car hire from previous roles. She will also look after the group’s Cruise Club.

Last week, Anna Perrott, who joined as head of cruise in December 2019, resigned after 20 days in the role, claiming the job had changed, along with reporting lines and responsibilities.

Asked if he would be seeking a replacement, Lewis said: “Julie will make that decision, but there will definitely be a requirement for someone to get the Cruise Club out to members.”

Lewis said Pinkney would also look at “creating a value product” similar to the Cruise Club, for sectors such as touring and luxury. “We always said one of our core strategies was scale, because with scale you can drive better opportunities for members,” he said. “Growing our membership has always been key and better tech and marketing can drive that.”