Kerala is the most relaxed part of India – this mantra is repeated to me by numerous friends before I set off on my first trip to the subcontinent.

It is the home of the ancient healing system of Ayurveda, and wellness runs through every facet of life here, from the omnipresent aromas of lemongrass and turmeric used in cleaning and cooking, to the eco-friendly initiatives set forth across the state.

I’ve joined a small group of intrepid Hayes & Jarvis staff to explore Kerala in depth, from its backwaters to its hill stations, with an add-on to the beaches of Goa just to the north.

Most tourists get to Kerala via Kochi (Cochin), which has served as a port, European colony and centre of the spice trade since the 1300s. Its international heritage is everywhere: Chinese-style cantilevered fishing nets are the city’s sightseeing drawcard, while Paradesi Synagogue was established in the fourth century.

The Dutch Palace (Mattancherry Palace) was really built by the Portuguese and only renovated by the Dutch, but inside, the Ramayana Mural Room artfully depicts an Indian Hindu epic in 300-year-old natural pigments. 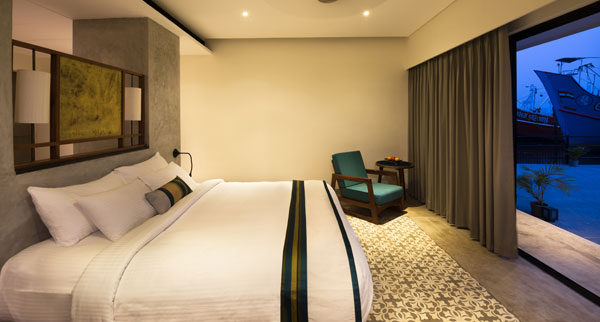 Over the centuries, Kochi has been occupied by various European powers, starting with the Portuguese, who made it their first Indian colony in 1503. The Dutch and British came later, and Portuguese explorer Vasco de Gama died and was buried here – a visit to the simple, white-fronted Church of Saint Francis affords a chance to see where he lay in rest for 14 years until his remains were moved to Lisbon.

“The hotel is made from local raw materials; toiletries come in refillable glass bottles and drinking water is put through a filtration system.”

But Kochi isn’t all history: arriving early in the morning, our guide and manager of destination management company Le Passage to India, Suraj, points to a car-park-sized area full of solar panels. “The airport is completely solar powered,” he beams. “It’s the first airport in the world to run completely on the sun.”

Arriving at our hotel, the Xandari Harbour (standard room: £98 per night with breakfast), we’re greeted with more environmental initiatives: the hotel is made from local raw materials; toiletries come in refillable glass bottles and drinking water is put through a filtration system. 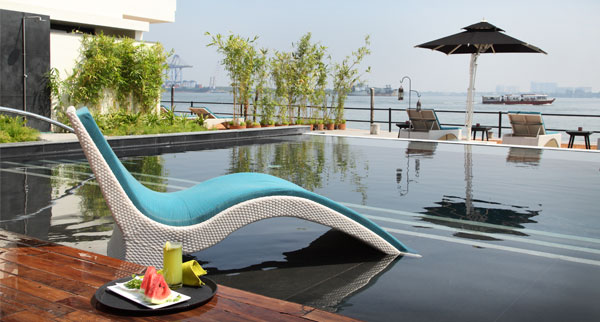 From Kochi, we strike out for the hill country, as the rain begins to pour relentlessly. We’ve come at the tail end of the wet season, which runs from June to September, and is best avoided unless you want a good soaking.

The Western Ghats range rises 80 miles inland from Kochi and runs south along the state border with Tamil Nadu. Designated a Unesco World Heritage Site, these mountains are home to thousands of rare flowering plants and insects, and animals and fish species not found elsewhere.

“Some travellers turn this into a trek of several days, but even an hour’s ramble up the hillsides in the rain leaves me breathless.”

It’s also a centre of Indian tea production, particularly in the historic hill-station town of Munnar, where the mountainsides are covered in a mosaic of emerald-green, terraced tea fields. After a visit to the informative tea museum, where we learn how tea is grown and processed, we hike up through the tea bushes, finding spectacular views over undulating hills. Some travellers turn this into a trek of several days, but even an hour’s ramble up the hillsides in the rain leaves me breathless – and ready for a cuppa. 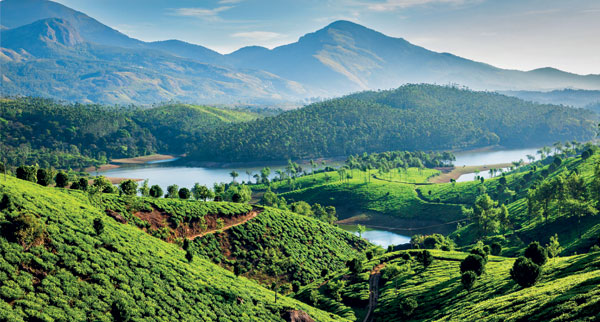 A magical place to stay is mountaintop resort Windermere Estate, where owner (and ophthalmologist) Simon John invites us to his bungalow for a pre-dinner drink. He says everyone calls him Dr Simon and explains that he bought the 24-hectare cardamom plantation in the 1990s and deliberately kept the working-farmhouse feel.

I start to remove my shoes, as is customary when entering any indoor space in India, but he gestures not to. “That’s not necessary,” he says. “We’re planters here. Please be comfortable. We run this place as a working plantation – we aren’t afraid of the outdoors.”

The John family started with four rooms and has gone on to build 12 cottages and villas. My spacious Estate Room (£182 per night with breakfast) has terracotta-tiled floors, a timber ceiling and a wraparound porch. After a huge dinner of fish curry, warming dahl and appam (rice-flour pancakes), I curl into a blanket and sit on the porch, listening to the jungle rainfall.

The monsoon season is not the best time to plan a visit to Periyar National Park, but our fortunes turn, and the sun peeks out as we drive the 60-plus miles south along the winding mountain roads to Thekkady, the park’s small-but-lively gateway town.

Periyar is a celebrated wildlife sanctuary, home to several threatened species, including Bengal tigers, white tigers and Asian elephants. Many travellers opt for a boat trip on Periyar Lake, but we’re taking a more immersive approach with a jungle trek led by an indigenous guide. We’ve already come prepared for rain and hiking, but upon arriving, we’re handed leech socks – essentially hessian sacks pulled over each foot and then shoved into the shoe and tied tightly at the knee. 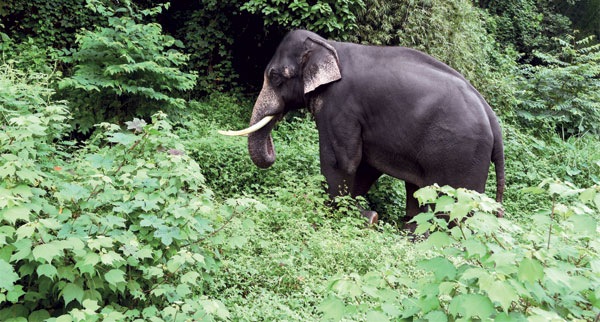 A precarious ride across the lake on a bamboo raft takes us into the jungle. The guide hacks out a path through lush vegetation with a machete, stopping occasionally to point out the sounds of distant macaques or the blue flash of a kingfisher’s feathers. We’re all very glad of the leech socks, as the suckers are, indeed, multitudinous and cling to our shoes and trousers relentlessly.

After about two hours roaming through thickets of ferns, palms and open wetlands (and a few spots of rain), we stop one final time, as the guide points towards a swaying tree right above us, where a family of Nilgiri langur (black monkeys) is hanging playfully from the branches.

Clients booking this worthwhile excursion should be given a detailed packing list that includes appropriate trekking trousers, boots, a long-sleeved top and a change of socks, as well as insect repellent and a sense of adventure.

Saving the best for last, we drive back to the coast at Alappuzha (Alleppey) and board a luxury houseboat to spend a tranquil day and night cruising Kerala’s backwaters. The state is criss-crossed by 550 miles of canals, lagoons and lakes, and taking it all in by boat is one of the region’s most popular activities.

Most of the boats in use today were originally kettuvallam – barges used to transport rice and goods – which have been converted into houseboats with an intricate, handwoven bamboo canopy.

“We board a luxury houseboat to spend a tranquil day and night cruising Kerala’s backwaters.”

Our boat is operated by Xandari Riverscapes, and holds to the same standards of eco-friendliness as sister property the Xandari Harbour in Kochi. Once aboard, there is nothing to do but settle onto the comfy banquettes on the upper deck to watch barges, fishing boats, other houseboats and the lush shoreline pass by. 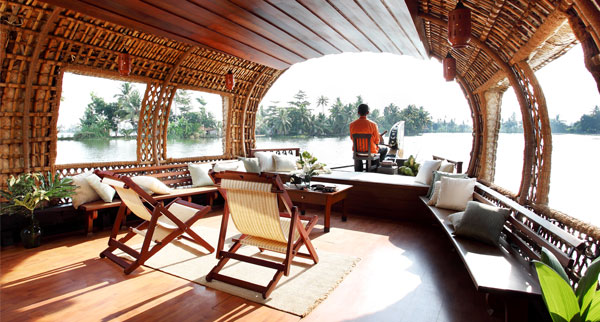 In the afternoon, we dock and transfer to a canoe for a one-hour excursion along a small canal, which offers a glimpse of life in a rice-farming community.

Suraj explains that the area was badly affected by flooding in 2018, and repair works are ongoing. The canal is barely wide enough for two canoes to pass, and it seems the whole community is out on the riverbank – doing laundry, digging foundations for new houses, selling refreshments or working in the paddies.

“The sun sets a brilliant pink over the glimmering backwaters and the stars come out in between the last lingering monsoon clouds.”

Back on the houseboat, we sit down for a sadhya – a traditional Keralan feast of many colourful curries and dahls served on a banana leaf. The sun sets a brilliant pink over the glimmering backwaters and the stars come out in between the last lingering monsoon clouds. My friends were right: Kerala has been a wonderful first visit to India, and I know that it will not be my last. 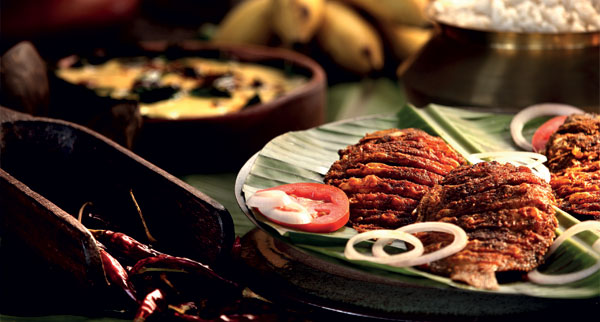 Goa makes an easy add-on to this trip, with plentiful flights from Kerala via Bengaluru (Bangalore). As opposed to the state’s party-hard north coast, southern Goa is more tranquil, with deserted beaches and tucked-away resorts such as the luxurious Alila Diwa (pictured), where the pool looks out over rice paddies, and a buggy service (or easy 15-minute walk down a palm-lined dirt drive) drops you at white-sand Gonsua Beach. Alila Diwa’s many restaurants are top notch (as is the poolside cafe, which serves craft beer brewed in Goa), but sneak away to Greenland, a beach-shack bar and restaurant for a truly Goan meal of spicy fried fish – caught that day on the owners’ boat – accompanied by a huge bottle of cold Kingfisher.

“This trip to the south offers a slower-paced introduction – slow by Indian standards – and takes in some of the regional highlights. Touring in India can be tiring, so I always recommend building in some relaxation time either within the tour or at the end. Agents shouldn’t be afraid of tailor-made enquiries either. They are not as complicated as they might seem and we are always on hand to help create their clients’ perfect trip.”

Hayes & Jarvis has a nine-night tour, Discover Kerala & the Tropical South, priced from £1,799 per person including flights via Dubai with Emirates, transfers, bed-and-breakfast accommodation and excursions as specified.
hayesandjarvis.co.uk