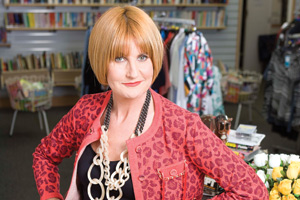 TV presenter and retail expert Mary Portas has called on retailers to give their views on how to rescue the beleaguered British high street.

Portas, who recently spoke at the Advantage Conference in Madrid and is better known as presenter of Mary Queen of Shops, is to lead a government review into the future of the high street.

The outlook for high street travel agencies is not encouraging. According to brochure distribution specialist BP Travel Marketing Services, there has been a 24% drop in the number of agencies on the high street since 2005.

Portas said: “With vacancy rates doubling over the last two years, the need to take action to save our high streets has never been starker. I am calling on businesses, local authorities and shoppers to contribute their ideas on how we can halt this decline.”

In a snapshot poll of travel retailers nationwide by Travel Weekly, agents highlighted issues ranging from parking and the lack of ‘attractive’ brands in town centres to vacant shops and dated travel agencies.

“Councils need to look at where they are spending money and spend it more wisely,” she said.

Harris claimed the review would be effective only if the government and local authorities took it seriously. “It doesn’t matter if it’s Mary Portas or your fairy godmother doing the review, if all it does is create a buzz and there is no follow-up from councils and some financing, it won’t work.”

Travel Angels managing director Peter Grayson said well-known brands, as well as independent retailers, were needed. He said: “When Marks & Spencer opened in Frome you could see the change in shopping patterns.”

Hosting events, such as markets, was also vital, he said, adding: “You have to do more to promote your town as a destination.”

He added: “I am delighted Mary has got this remit. It’s depressing to see so many shops boarded up.”

The review will study problems such as vacant shops and the proliferation of ‘clone towns’. It will also suggest business models to suit today’s shoppers and look at how to increase the number of independent retailers. The findings will be presented this autumn.

Comments from around the UK

“Unless there are shops to entice people into towns, what is the reason to go? In Hinckley, there is only a Burton for men and a New Look for women; it’s hardly an incentive to go into town.”

“I’d ask Mary Portas to tackle parking at a government level. Our county council is considering making the high street and streets off it all metred parking. This would just crucify us.”

“People need to see towns as destinations for shopping and offering bespoke experiences. We need to remember retail centres are not just about selling things, it’s about having an experience.”

“I think the internet is the problem. I want to know from Mary Portas how we can attract people to come back to the high street. It’s got to be about service and that personal touch.”