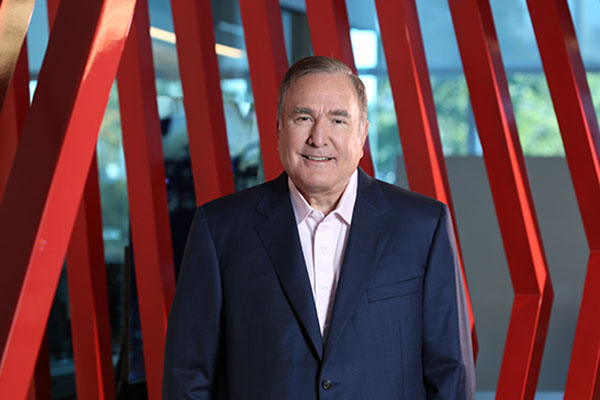 The whole travel industry has been “wounded” by the Covid-19 pandemic, but Richard Fain believes memories are short and that, after months of isolation, holidays will become more valuable than ever.

“It will take us a while to rebuild back to where we were. But that is what our industry does,” says Fain, chairman and chief executive of Royal Caribbean Cruises.

“There’s a reason this is the largest and most important industry in the world today and that’s because people need it. In the aftermath of Covid-19, the chance to be with other people, to have new experiences, will actually be more valuable than it was.”

He acknowledges the sector will have to adapt but says cruising has been adapting and changing for years.

“Cruising last year was not like it was 10 years ago. Cruising keeps changing every day; we keep learning.”

Fain says anyone suggesting people will stop travelling or be deterred are “wrong”.

“Take 9/11. It really epitomises why I think people are overreacting and why people misunderstand the implications of this,” he says.

“After 9/11, people were saying we would never travel again, or that travel would be so different that people wouldn’t want to. Both of those extremes are wrong.

Fain says any changes required at first might not need to be permanent.

Likening the situation to restaurants, he says: “Some are starting with low levels of capacity so they can social distance. Then, as they prove that works, they’ll reduce the social distancing. Before long, these restaurants will be back to the way they were before.

“With cruise there’ll be a transition period too but the fundamental experience – the things people like about it – will still be there, and that’s what makes it attractive.”

Fain says people have short memories so will not be put off cruising in the long term as a result of the negative press it faced at the start of the crisis, but admits the sector has work to do.

“The people with experience in cruising understand what the environment’s like. Their attitude towards cruising is fundamentally different than the attitude of people who have never taken a cruise. The more people know about cruise and about how we operate a cruise, the more likely they are to come back.

“It’s always been harder to convince somebody who’s never taken a cruise to try one for the first time, and there’s no question it will be harder now than before. But that’s our job. And that’s our travel agents’ job,” says Fain.

“They buy a cruise either based on their own experience, or because somebody they trust advised them – and the person that’s going to do that is most likely today to be a travel advisor. So we need to be careful we’re being transparent and disclosing what we’re doing, why we’re doing it and how we’re doing it.

“We need to give travel advisors the tools they need to win over the people who have never cruised and who I admit will be more resistant today than they were years ago.”

Fain says agents will be far more effective in getting the messaging out around new hygiene and cleanliness protocols and safety standards than any white paper.

Asked if it would be easier to control the spread of any diseases on a private island, and if Royal’s Perfect Day islands might become more integral to the group’s programmes as a result, Fain jokes: “I’m not going to claim we had the premonition to design these private destinations because we knew they were going to be so helpful in the time of Covid-19. But if you want to draw that conclusion, that’s fine by me.”

He does, however, say they could be pivotal in the company’s return. “In all seriousness, the beauty of the private destinations is that we control them completely. Everybody on the island works for us and follows protocols we put in place so, in the beginning, that will be very valuable.”

There is no simple answer to which of the group’s brands and ships will come back first, says Fain.

Asked whether luxury cruising – Royal’s brands include Silversea Cruises – where there is arguably a greater space-to-passenger ratio, and itineraries feature remoter destinations, might be more popular post-Covid-19, Fain predicts “they’ll all come back gradually”, adding: “I don’t know whether we’re going to restart with this brand or that brand. We are looking at it with the experts.”

Fain would not be drawn on whether prices would be cheap at first to attract customers back. “There are so many variables,” he says.

But he admits the crisis is likely to have an impact on overall industry capacity. “The shipyards have all said they expect their production capability to be impacted. That by itself will reduce the supply of ships. So yes, I expect all that to have an impact [on overall capacity].”

Royal Caribbean International’s Anthem of the Seas had been due to sail out of Southampton this summer, while Celebrity Cruises’ Celebrity Apex was due to be named there ahead of a short series of sailings.

Asked if Royal is likely to operate any ex-UK sailings this summer, Fain says: “A lot depends on how well the governments in different places manage it and how welcoming they are.”

He says the UK remains a hugely important market for the group.

“This is a place that needs to be an important part of who we are. Britain has always been a key market for us. It’s also been a welcoming market. The trade, the government, the people, have all made us feel very welcome. And that’s an important driver of where we send our ships to.

“I look forward to celebrating as we are sipping champagne over our return to operations in the UK.”