Q. How long did you know Nelson Mandela?
A. I first met Mandela when I was 18 and at that time I’d never heard of him. I’d been sent to Robben Island to meet what were supposedly the biggest criminals in South Africa. I was expecting gangsters, but I met ordinary people and at that time it was very painful for me to see how they were being treated. I was supposed to hate Mandela; I was told he was a terrorist. But I couldn’t hate him because he was so humble and friendly. I was on Robben Island with him for the last four-and-a-half years of his 18 years in prison; then I was transferred to Pollsmoor Prison with him.

Q. What was he like as a person?
A. He was very disciplined. He was always up early in the morning. He created a small garden in the prison courtyard and would tend to that every day. He would also study and exercise, and his routine was so set he sometimes said he couldn’t believe the day had gone so quickly.

“Another memory I have is seeing boxes and boxes of birthday cards that had arrived for him during my first year on Robben Island. We counted them and there were tens of thousands.”

Q. What memories do you have?
A. One of my strongest memories is when his wife, Winnie, visited with his grandchild. Visitors weren’t allowed to take children in with them but Mandela begged me to let him see the baby, so I agreed. When Mandela took the baby out of my arms it was so emotional. When he kissed the child there were tears in his eyes, and from that moment we started becoming friends. We kept it a secret for 20 years. Another memory I have is seeing boxes and boxes of birthday cards that had arrived for him during my first year on Robben Island. We counted them and there were tens of thousands, but only 10 from South Africa, because anyone who dared to send him a card would be arrested and put into solitary confinement. 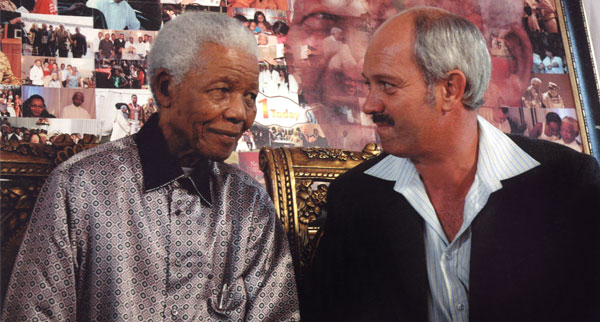 Q. What was his attitude to being in prison?
A. I asked him on one occasion: “Don’t you ever give up hope?” He said: “Mr Brand, I could never give up hope. Whenever new, young prisoners come in, it gives me hope that the fight is still going on outside.” And I asked him one day why he and his comrades never tried to escape. He said if they escaped, the police would kill them, and then they couldn’t continue to fight. He said: “While we’re in prison, we mustn’t just sit here doing nothing. We must educate ourselves, and prepare ourselves for when freedom does come.”

Q. What did you do after Mandela’s release?
A. When Mandela became president, he offered me a job in the Constitutional Assembly. Later I was offered a job at the Mandela Foundation, but I didn’t want to leave Cape Town, where my children were in school. So instead they offered me a job at the Robben Island Museum, where I started working in 1997, when it opened.

“I also offer private talks for those who don’t have the time to visit but want to hear more about how me and Mandela, a white man and a black man in South Africa, became friends.”

Q. You offer private tours on Robben Island – what do these involve?
A. In 2018, I retired from the museum to set up private tours, as I wanted to bring more tourists to Robben Island and other sites where Mandela had spent time. We offer ferry tours as well as helicopter tours from Cape Town, and I show visitors around Mandela’s cell, talking about my memories and stories of him. I also offer private talks for those who don’t have the time to visit but want to hear more about how me and Mandela, a white man and a black man in South Africa, became friends.

Q. What lasting influence has Mandela had on you?
A. He always said you must not just live for yourself in life – you must try to help others. The more you educate yourself, the more you can educate other people and make the world a better place. He also encouraged me to make friends abroad, to help create more peace in the world. Now I have friends all over the world thanks to my book, Doing Life with Mandela. I have Mandela to thank for that.