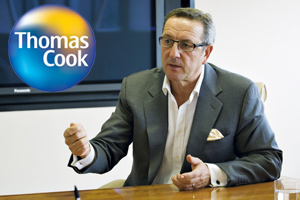 But within an hour the warning had triggered a 26% fall in the Thomas Cook share price. By midday on Tuesday, the group’s shares were down 30% on the day, 33% on the week and 55% on six months ago. The company had lost half its value.

Part of the fall was due to an overall decline in the stock market. But Thomas Cook’s decline went way beyond that.

A profit warning from a major group often triggers a drama. Shares are a claim on future profits and City analysts, brokers and big investors can desert a company in droves if spooked.

In the words of analyst Nick Bartram of KBC Peel Hunt: “The stock market does not like surprises or uncertainty. It was a pretty savage reaction, but the market always operates around extremes.”

One immediate impact of the market fall was that it took Thomas Cook’s total share value – its ‘market capitalisation’ or the company’s nominal worth – to £1.05 billion. That was marginally below the group’s net debt, reported in May as £1.09 billion.

This need not be a problem so long as Thomas Cook can service the debt – meet its payments – and nothing leads its lenders to believe the group cannot pay it all back. But as Bartram says: “It does not look good.”

The ratio of debt to market capitalisation is one of the measures analysts and institutional investors use to assess the health of companies. The lowered share price might tempt some investors to buy into Thomas Cook, but the debt ratio will deter just as many.

Thomas Cook blamed “difficult trading conditions” in the UK and the higher-than-forecast impact of unrest in the Middle East and North Africa – particularly on sales in France.

These explanations make sense. The UK is caught in the worst squeeze on household spending since the Second World War – people have less money to spend after paying bills and buying food than last year or the year before – and this is hitting every retail sector.

The downturn to Egypt, Tunisia and Morocco has hit the French market, where these are key destinations, even harder than here.

But there is a sense that something more is wrong.

Bartram says: “Is the business model not as flexible as Thomas Cook said? Are there areas they have not got right? Did they call North Africa wrong?

“What’s a surprise is the extent of the downgrade. It’s a slashing of forecasts.”

What next for Thomas Cook?

A number of things are likely to happen next, but there is a huge degree of uncertainty.

Thomas Cook promised “a fundamental strategic and operational review of the business”. Details have yet to appear, but this will inevitably mean changes in the areas regarded as under-performing – primarily the margins on UK sales and the product on offer.

It places a substantial question mark over the planned retail merger with The Co-operative Travel and Midlands Co-operative, on which The Competition Commission is believed to be ready to publish its findings.

No one anticipates the commission ruling against the merger – it is expected to order a disposal of some parts of the business and a set of guarantees to rival businesses.

But why would Thomas Cook seek to increase its high street presence by 50% to 1,200 shops when it has just been caned for a lacklustre performance with what it already has? Does it need the distraction of merging the businesses now?

Bartram says: “That is a very good question. Retail is struggling. Clearly they will look at it.”

The group will no doubt give scant further detail until August 11 when it is due to publish results for the nine months to June. It will use the time in between to consult investors, review its business and draw up a plan.

The company is trading profitably. It is not in any danger. But everyone working for Thomas Cook faces a deeply unsettling period.