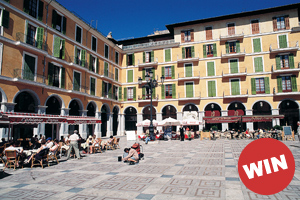 Cosmos is to take 50 agents to Majorca on a super-fam to celebrate its 50th anniversary.

The trip will focus on activities rather than lots of hotel viewings.

“This will be a fun trip with lots of excursions,” said head of agency sales Orla Kern.

“We want to say thank you to the people who sell our holidays.”

The operator is running a prize draw for a place on the trip, specifically targeted at agents who sell Cosmos Holidays and Cosmos Tours & Cruises, rather than senior agency staff.

It will be the largest fam the company has run since a trip by sister company Avro in 2009. The operator usually hosts about 20 agents on fam trips.

The three-night fam, from October 3-6, offers flights out of Gatwick and Manchester. It will include a gold-themed party to mark the 50th birthday.

The trip coincides with Abta’s Travel Convention, at which Cosmos will be a headline sponsor, but will be separate to the forum.

Majorca was one of the operator’s first destinations, when it started trading in 1961.

The operator is offering £50 discounts on many of its holidays and has visited 350 agents as part of a promotional campaign, which has included giveaways such as 50th birthday mousemats.

To be in with a chance of attending the fam, agents must make a Cosmos booking and email their booking reference, by August 31, to agencysales@cosmos.co.uk

Cosmos Holidays has unveiled its first dedicated brochure for Goa and the Indian Ocean.

The brochure, valid for holidays from November 2011 to October 2012, features 14 new properties in Goa as well as the new resorts of Bambolim in central Goa and Bagator in northern Goa.

Capacity to Goa over the winter period has been doubled from Gatwick and Manchester.

Other new product includes two five-star properties in the Maldives and a four-diamond-rated all-inclusive property in Mauritius.

Early-booking offers include a low deposit of £100 and savings of up to £1,000 per couple on holidays to the Maldives in November, and two weeks for the price of one on selected November and December holidays.

Prices lead in at £499 for seven nights’ bed and breakfast at the two-diamond-rated Beira Mar on Baga Beach in north Goa.

Cosmos has also released its Lapland brochure for December 2011, with three more two-night trips and extra one-day departures to Kittila in Finnish Lapland.