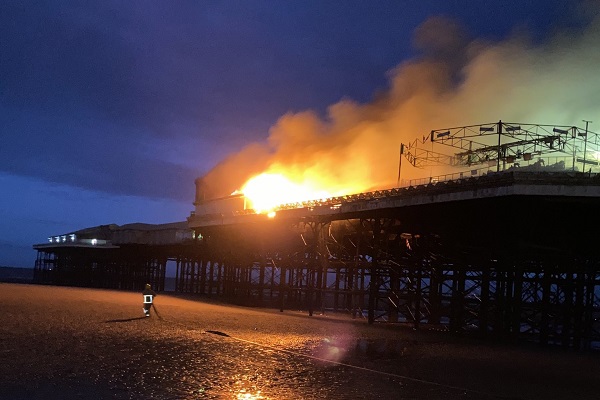 A fire broke out on Blackpool’s Central Pier in the early hours of the morning, with 10 fire brigade crews summoned to tackle the blaze.

Lancashire Fire and Rescue Service said about 50 firefighters were sent and found a workshop and a ride half way along the pier ‘well alight’ shortly after 3am.

Shortly after 8am three fire engines remained on the site and the town’s Promenade was closed from Foxhall Square to New Bonny Street. The junction with Chapel Street was also closed.

Incident Commander Mark Winder said: “The fire involved a workshop and a ride approximately halfway down the Central Pier. Fortunately, early firefighter action has extinguished the fire to the extent there is no visible flame.”

Blackpool’s Central Pier was built in 1868, with the big wheel installed in 1990.

One from the crews at the scene early on this morning at Blackpool pic.twitter.com/vDSfbYbH4R